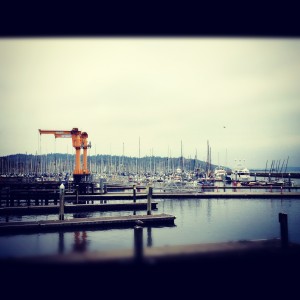 The thing that’s been great about all this floundering unemployment is that it’s helping me evolve myself into the writer I’ve always wanted to become. And by that, I don’t mean at all that I’ve become good at it. But I am writing, and that’s more than I can say for the majority of the last decade in which I merely thought about it. I have time to read so much now, which as many successful writers will tell you, is a key to being one. So I read all the authors I admire and I read unknowns that I think are going to be discovered and I write my own shitty drafts and I don’t worry so much anymore about whether they sound bad because I understand now that this is the equivalent of starting out slogging through a wimpy 12 minute mile in the journey to one day race in an ultra marathon. You have to start with the shitty stuff and be humble enough to own it and grow from it. And more importantly perhaps, you have to sort of believe that your voice matters, that you have something important to say– no matter if its funny or serious– you have to believe that it’s important even if deep down you know that it’s horseshit drivel that can’t possibly affect the shaping of the world to come in the way you want to be remembered.

Because if you don’t believe this, you won’t write. You will continually come up with reasons, from your own internal voices or from those external, real or imagined, for not writing. We may all be insignificant Carl Sagan dust specks on dust specks but that doesn’t mean we can’t invent our own relevancy. If not now, when?

Besides, I wrote this from my iPhone while sitting at Golden Gardens yesterday, while everyone else was in an office slogging on a computer. It sounded like a nice theory for justifying the way I spend my time.