Of rocks and talismans

I finally went to Vegas and I didn’t gamble a single penny.

Not on cards or dice, anyways. Nor with money, because the money was pointedly spent on the plane ticket from Seattle without a shred of doubt or remorse. What I gambled on was the possibility of losing my composure, on throwing responsibility out the window and letting go of all focus as we sped away from the buildings and flashing lights and toward the blood-red megaliths rising from the desert floor. Let me explain.

In February, Shannon sensed my bone-chilled desperation and sent a message about what she assumed would be a long shot: an invitation to meet in Vegas and join a weekend of climbing in the Red Rock Canyon. To my winter-wearied soul, this was not a long shot, but a gift from the heavens. I had a plane ticket confirmed less than 48 hours later. 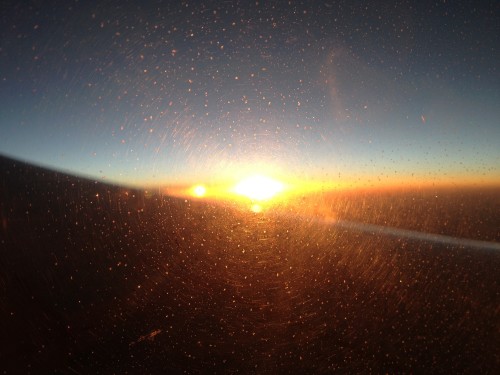 My roots up here in the 47th parallel run deep, and being Northwest-bred, I take pride in my ability to weather the most bitter of conditions. I come from a land that is dank and fecund, green and watery, and I love it fiercely. But maybe it’s time I put all that waxing poetic aside and be blunt with the truth: My name is Mackenzie and I am a Full Sun Perennial. 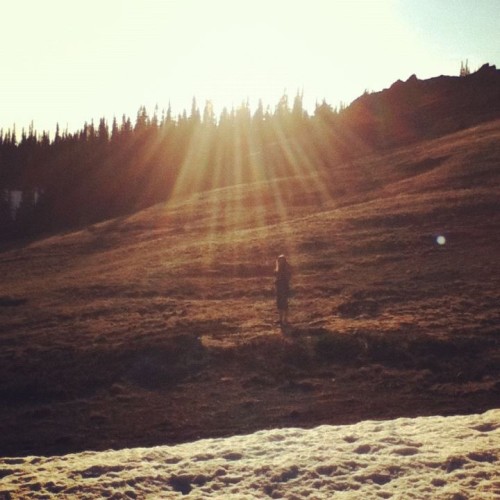 So I flew to Vegas a few days before St. Patrick’s Day and waited on the airport curb for Shannon and Jeremy to pick me up, shouldering a bag that miraculously held all my tent, gear and a few items of clothing. The minute that the dry, unfiltered sun hit my face, I felt my veins open up like gnarled fists given a shot of Dexamethasone. It was the first time I’d felt real honest-to-goodness warmth since October. 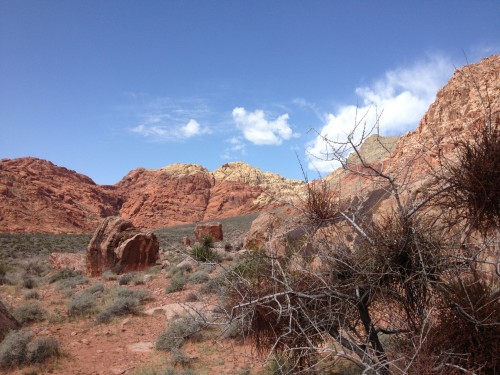 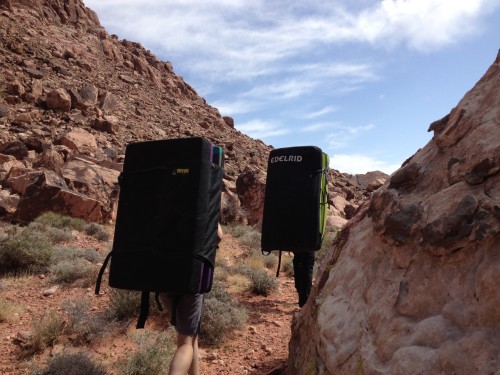 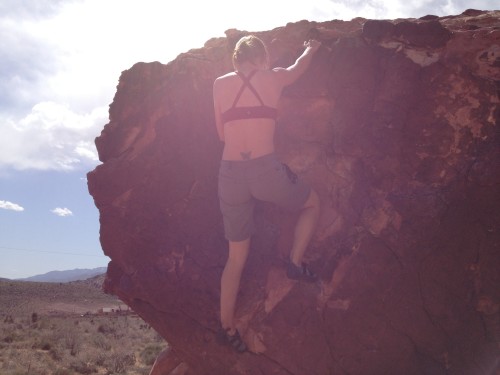 On our first night in camp, we almost blew away as the wind tore through the canyons and threatened to snap our tent poles. I slept in fits, waking to a noseful of dust and nylon flaps blowing into my head, and tried to burrow further into my sleeping bag cocoon as the thrashing went on until nearly dawn.

Morning came, and all was swept clean. So was my head. I couldn’t remember anything on my work To-Do list from the past week. I couldn’t remember what was supposed to happen when I returned home. I searched my brain for clues and came up with sun, rock, food…sleep, happy? I figured that was good enough for now, and closed my eyes again. 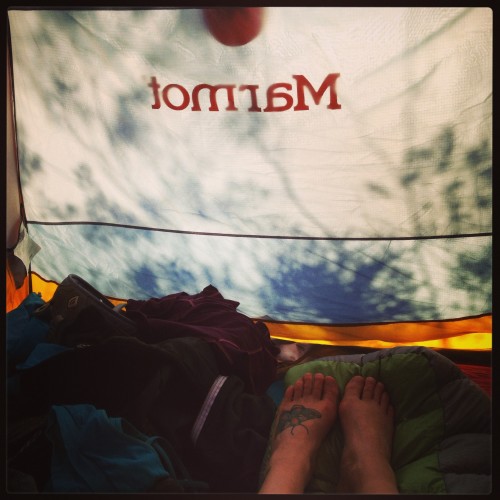 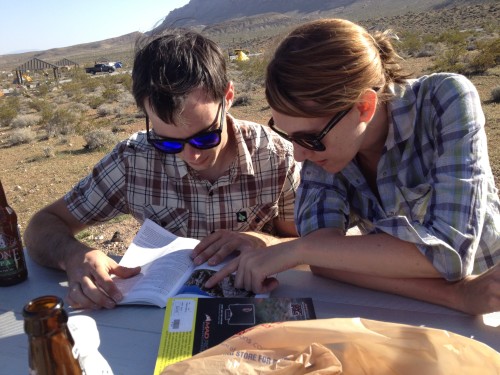 After shaking the dust from our bodies and refueling with pancakes and oatmeal, we set our sights on two trad routes in Juniper Canyon, aiming for a total of 11 pitches if we made it to both climbs. Somewhat predictably, we made it to neither, and ended up at the base of a completely different tower, overshot by several pinnacles to the north. 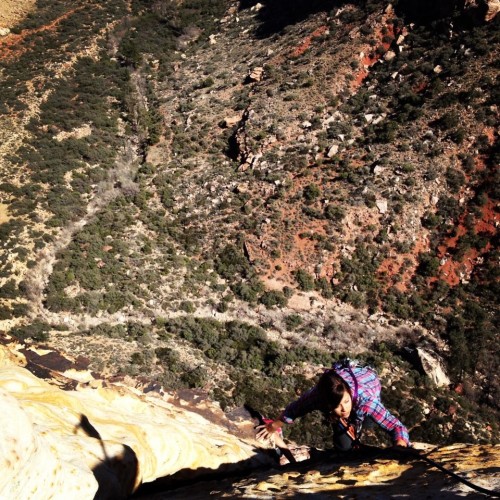 Six pitches later, Shannon followed me up the final ten feet of Cat in the Hat until we clipped into a nucleus of rope and slings, legs and bare feet, crouching in a jumble around the anchors. As I tightened the gate on the carabiner and tucked my arms around my knees, my brain skipped backward to a silhouetted grove of eroded granite pillars and limber pine, to a fourth of July now three years gone. In the wind, I could smell the memory—a hot day lingering on the night’s tepid air as we climbed in darkness. Hands groping for anchor chains as one foot dangled off the exposed face into nothing, fireworks exploding red and white and gold on a distant horizon line, miles away and below. We had ascended by moonlight to a spire summit no bigger than a loveseat, and watched that distant Dakotan town explode into a celebration of independence before rapping back down through the abyss between silent sentries of wind-worn rock. I’ve tied into a growing tick list of anchors since that night, but the feeling has never changed—exhilarated and solemn, as if I’ve walked into a cathedral hall where the spell of the place encourages speaking in hushed tones without having to be told.

Above us, shadows had begun to slide over the pinnacle of Mescalito. To the east lay the Strip, washed out and overexposed in the harsh light of late afternoon. Sunburned and tired, we tried to discern where amidst that hazy tumor might be the hole-in-the-wall Mexican joint that could satisfy our sudden and urgent need for chips and guacamole.

There would be no gorging on salt-laden chips, however, until we closed a gap of 650 feet between our perch and the valley floor. We simul-rapped down as quickly as we could, leapfrogging other parties still working their way upward. 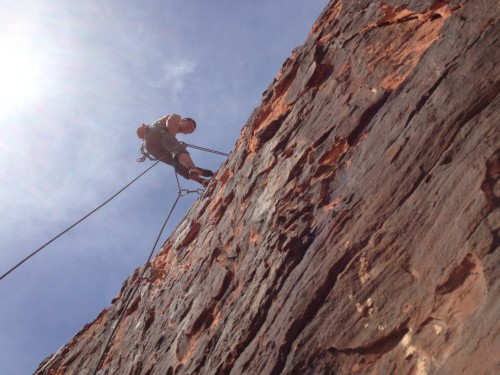 I volunteered to drive us to the Strip, soon to be overwhelmed by epileptic displays of hedonism backlit in glitz and neon. Haphazard rivulets of drunk pedestrians spilling over the sidewalk curb and into our driving lane and a string of badly timed stoplights turned our quick jaunt down Las Vegas Blvd into a glimpse at what—if my atheistic instincts have in fact led me astray—will be my own personal hell.

I silently vowed never to return to that particular stretch of asphalt while sober, if at all. Then I snapped this shot of Pang on a masterful, flip-flop-clad, no-tape FA of an unnamed crack in the Mandalay Bay parking garage. 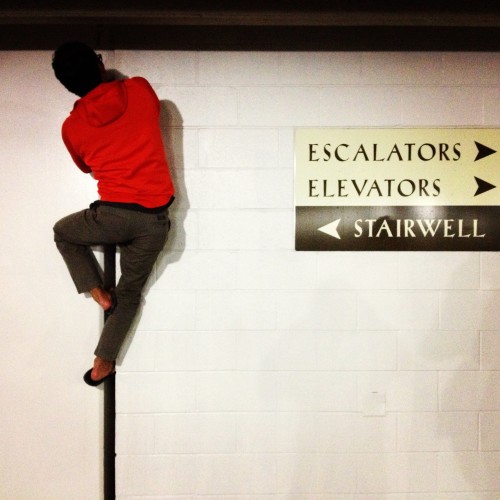 On our last day we went back to the park, this time to bolted routes on pockmarked sandstone, varnished with red-black patina. After not climbing on ropes for several months, I was nervous when my turn came to lead, but it all came back. I climbed fast, but not out of hurry or fear. I just moved at the pace that found me, feeling solid all the way to the anchors before clipping through the draws and leaning back into sunlight and blue, arms loose, eyes closed, blissful at an unexpected revival of confidence. It really does all come back around, I thought. The Spring, the sunlight, the strength you forgot you had or thought was lost. 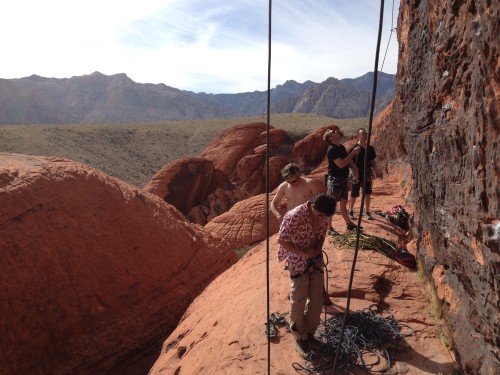 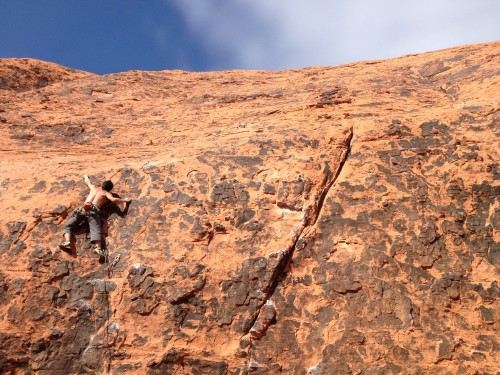 Subtlety is the desert’s language, though by no means does it lack for striking beauty or power. Until you’re standing right in front of its walls, you wont see the signs of weathering that it bears in half-dissolved petroglyphs of manganese and iron, varnished by the abrasion of wind and sand. Until you’re in it, and maybe not even until after you’ve left it, you hardly notice that its song is working itself into your mind.

And that’s where the gambling comes in. It took me nearly three days to recover my focus. I came back to deadlines, bills nearing due, a stalled tax return, a ticket for an enormous parking infraction, chiropractor fees, and a depletion of groceries, but all I could think about was whether I could sleep comfortably in the hatchback of my car with the seat folded down and whether my parents’ garage still contained an inventory of now-unused camping gear that could round out my setup for the roadtrips I had begun to plan.

Yesterday afternoon, my dad pulled a dust-covered cardboard appliance box down from a shelf in the garage, and we peered inside. Underneath a blue rain fly and the two-burner Coleman stove I had been hoping to snag, I unburied a treasure. A piece from the past, my past, my blood: an old, lightweight backpacker stove made of solid brass that had belonged to my grandfather. I shook it, hearing the tink of liquid sloshing inside. 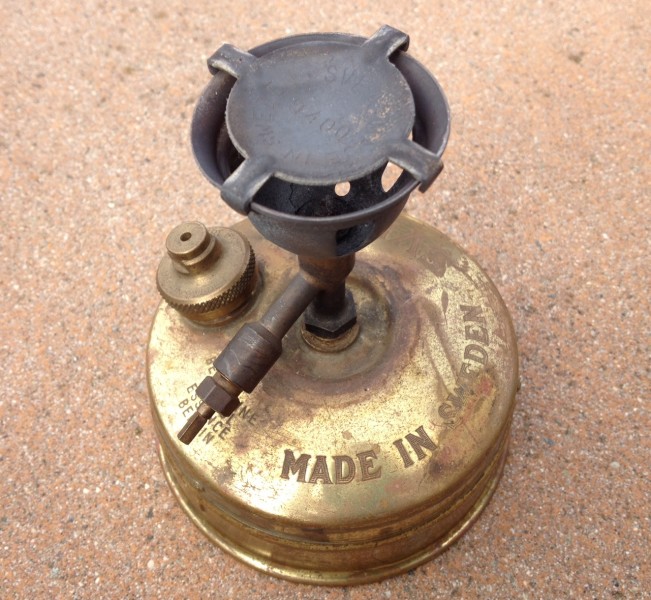 You can order these things online or find them used on Ebay by the dozens. To anyone else, it might be nothing more than a conversation piece. But I have nothing else tangible that belongs to him, only memories that weave his later life into my narrative, into the parts whose outlines in the rearview mirror aren’t so sharp anymore. Finding this piece of him was like discovering a talisman I didn’t know I was looking for. It holds the outlines I know—my grandfather sleeping outdoors in the Cascades, fishing for trout, hunting and exploring, words like Kachess, Grayland, and Pend d’Oreilles—but leaves it entirely up to me to fill in the rest. It’s begging for a second life.

And I intend to give it one.

Surviving in good faith
Together and alive