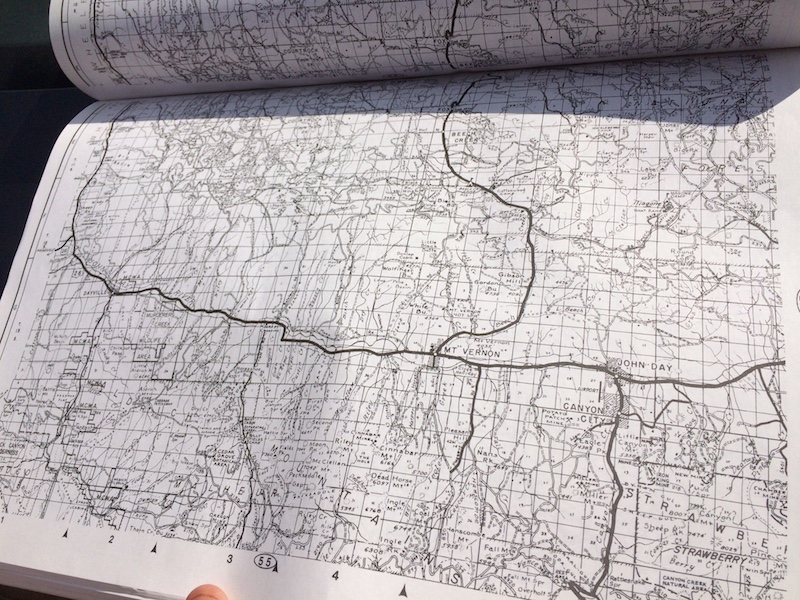 Some say that Rattlesnake is a harbinger of rain and thunder, a spirit-god who can summon water when the ground has dried up and the crops are thirsty. I say he’s just a guy whose path I’d rather not cross. But cross him we did, the fierce rattle of his tail beads drawing adrenaline into my chest and cuss words out of my mouth as he coiled into a striking stance aimed at my ankles. It took five long minutes to decide how to navigate a wide arc around the spot of sunlight he’d claimed on the Blue Basin trail, after which we walked much more carefully and wondered how much more wildlife we were going to nearly run over on this trip. An hour later, dark rain clouds and sharp growls of thunder rolled over the valley as if on cue.

First it was the deer. A mama and two quite-new fawns bounding across the two-lane highway leading to Madras. Passing their intersection, we realize that through the haze we can see five volcanoes at once, lining the horizon from north to south. Stop, stretch, breathe seems to be the message. 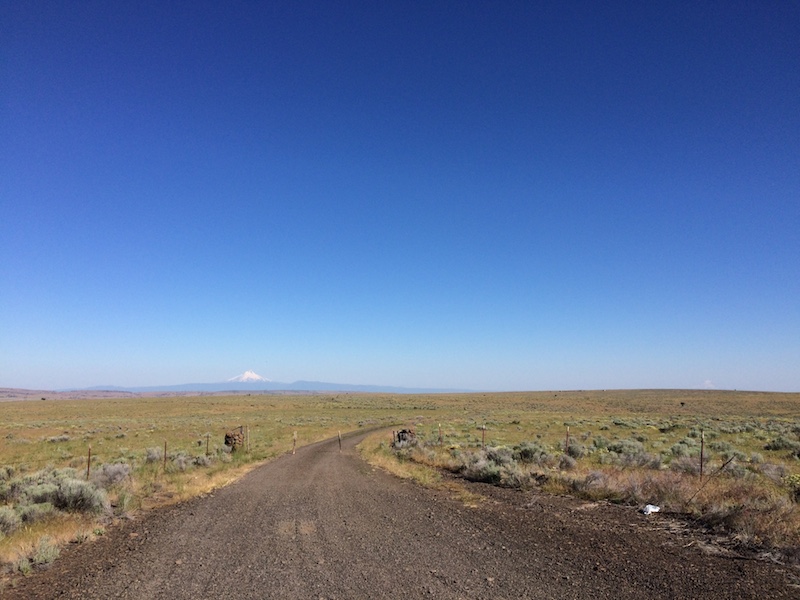 After several miles of debating which peak is which, we get them sorted and I feel the satisfaction of being able to call out that which has become familiar during my last year in Oregon. I think about how the knowledge of naming the world around us make us feel more whole. About the woman at work whose memories are unraveling day by day, and the fear in her eyes as she discovers that names, stories, and faces are abandoning her with every sunrise.

The route south turns east. We earn a speeding ticket from a red-cheeked young trooper who appears quietly embarrassed under the shade of his campaign hat.  Prineville welcomes our passing-through with its prepper store (“Survive Anything!”), gas stations offering biscuits and gravy, and a bait shop with live crickets.  A very out-of-place turtle rushes across the road in front of us in Mt. Vernon, looking all the part of Fred Flinstone yabba dabba do-ing out of the way as I slam on the brakes.

Inside the Kam Wah Chung Museum, we peer through dim yellow light at tools and tinctures belonging to Doc Hay, an immigrant physician from Guangdong who came to John Day in the 1870s. His pulsology and herbal treatments were legendary among the area’s Chinese miners and laborers, and after his death it was discovered that of $23,000 in earnings he chose not to cash a single check. 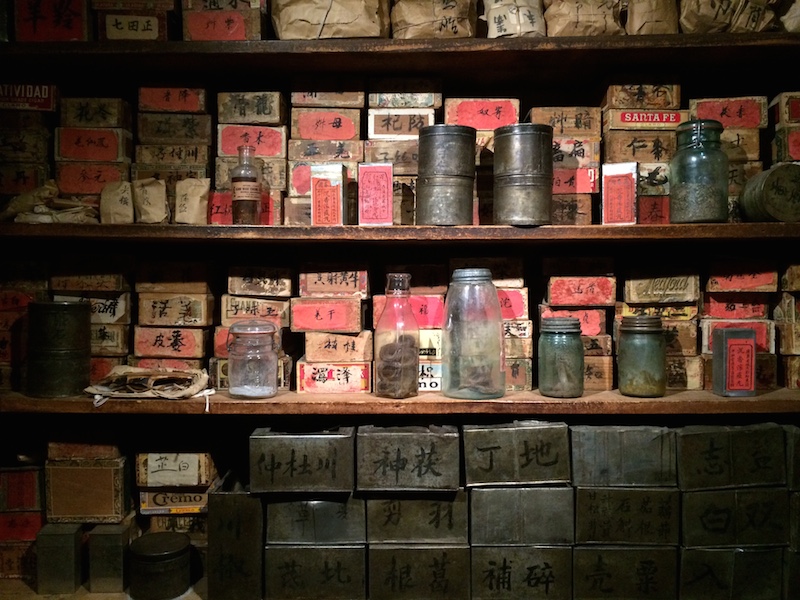 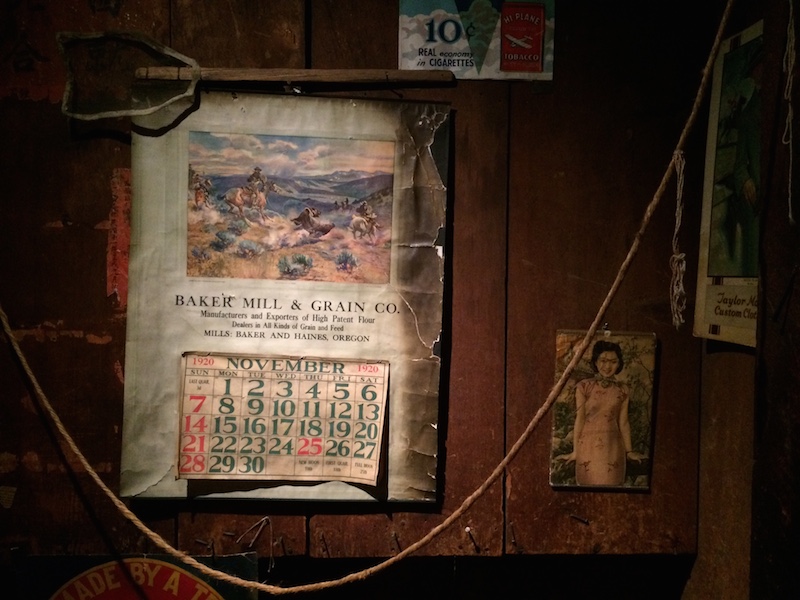 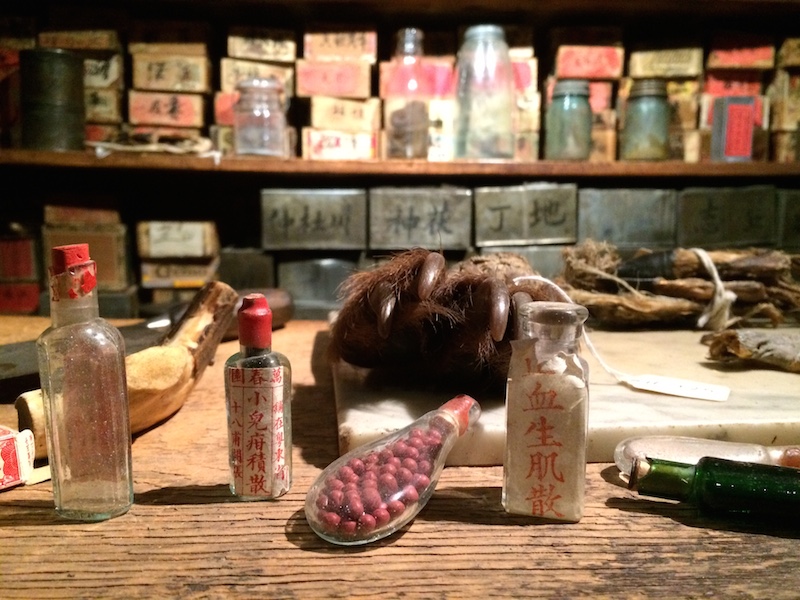 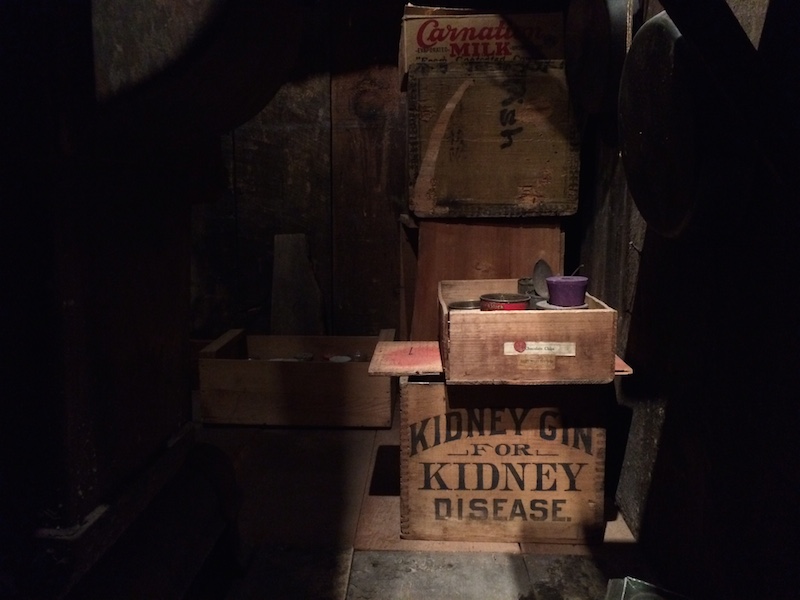 In Danville, we stop at the only gas station (“Lowest price in town!”), and ask for directions to a campsite we’ve heard good things about. The clerk pulls out a map, trailing her fingers along the river’s border to point out eligible territory, and tells us to watch out for Sean, a local man who fancies himself as holding the authority of a sheriff, though he is not one. “The first time I met him I wondered how I wasn’t already divorced from him,” explains the clerk after she pumps our gas. We thank her, smiling, confused, and head north past Sean’s dominion to a BLM site along the John Day River. Along the way, I almost hit another deer in his poorly-timed long jump.

In the 90-degree heat, we have Lone Pine camp all to ourselves except for a troop of rangeland cattle that bellow at us from the other shore. After a long cool soak, Crystal grills mako shark steaks for dinner (being a bartender has its perks). We drive upriver to splash around in gentler current until the light begins to dip below the mountains. Dusk is glowing over their outline while we set up a tent and then decide to sleep out under the starlight anyways. The pinholes of Venus and Jupiter appear, and as bats dart over our heads we try to stay awake to watch the moon come up, but fail. 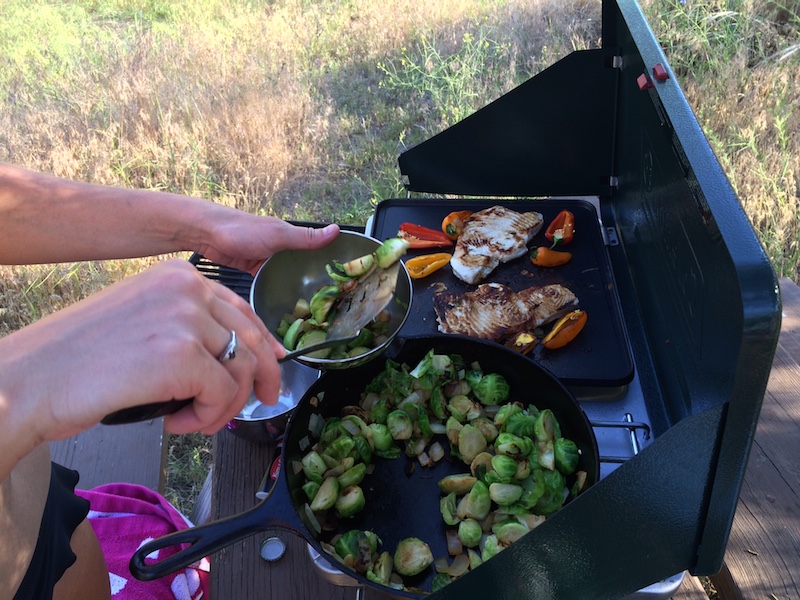 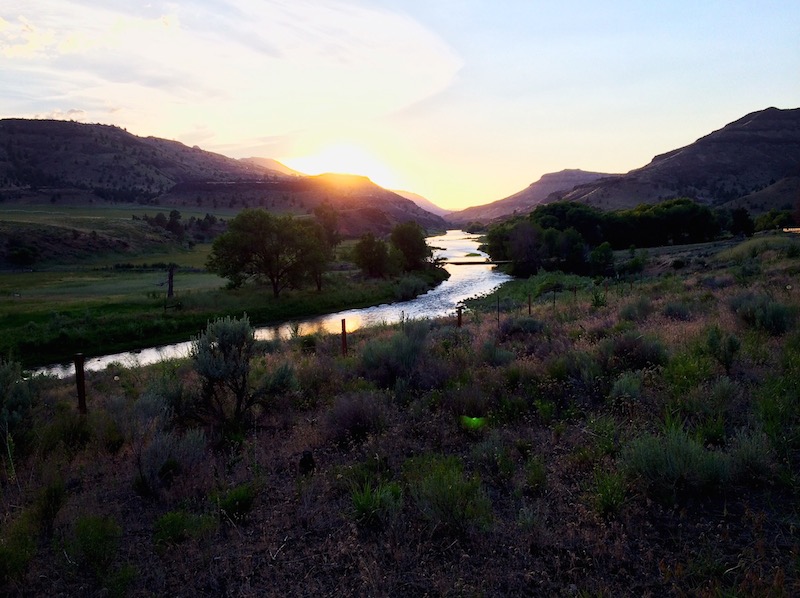 I awaken to a bright waning moon slung low in the east, and realize I am freezing but too tired and cold to surmount the task of leaving my thin blanket cocoon to get my sleeping bag from the trunk. Sleep comes again, in several brief doses. When my alarm rouses us in the luminous twilight of 4:30, we make coffee, break down half our camp and head for the Blue Basin. 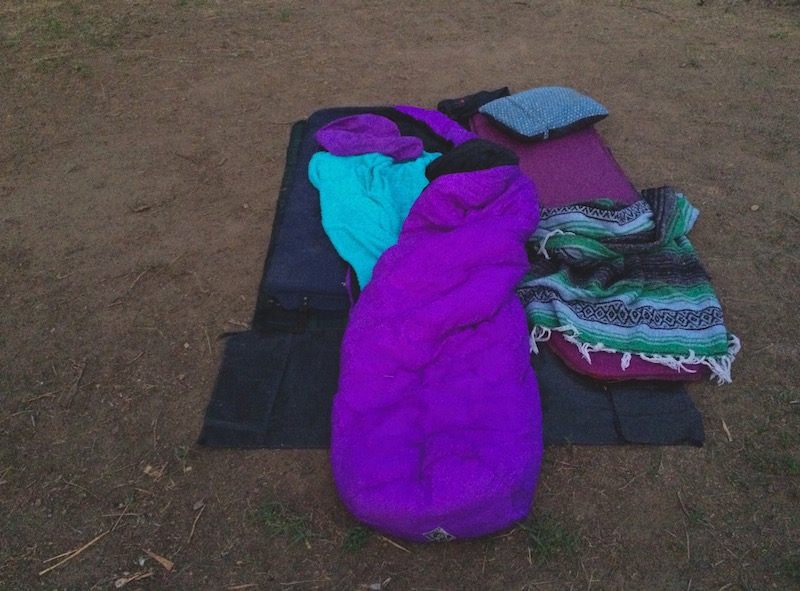 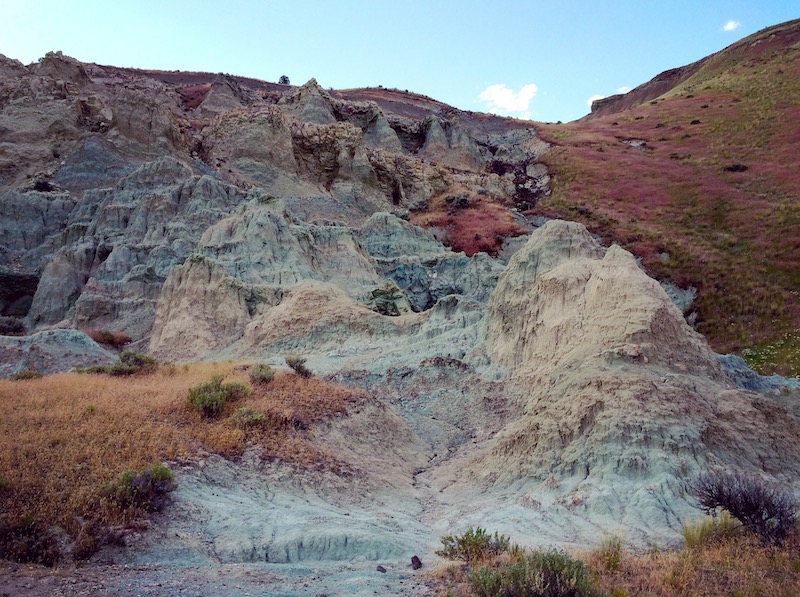 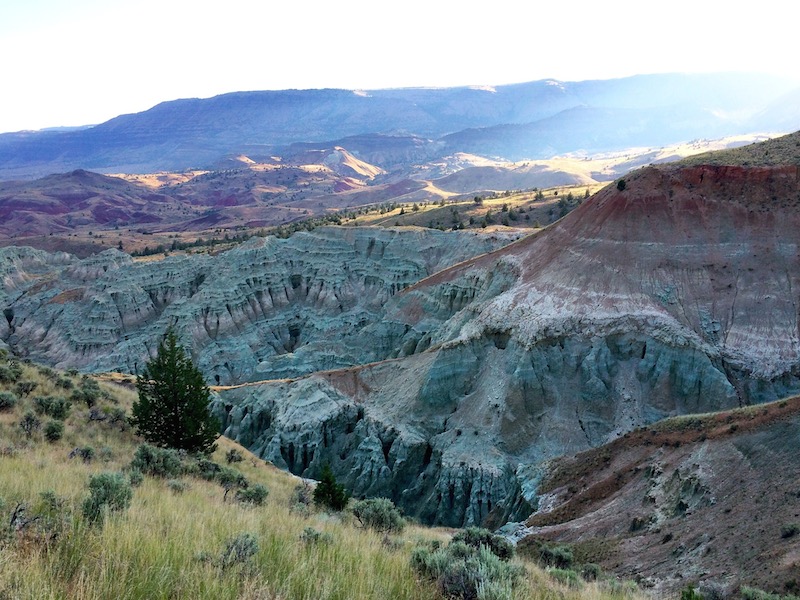 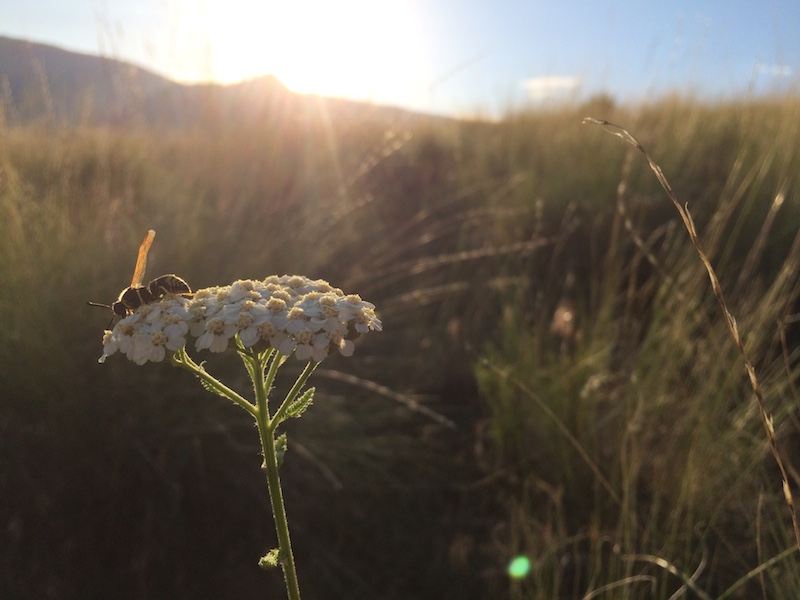 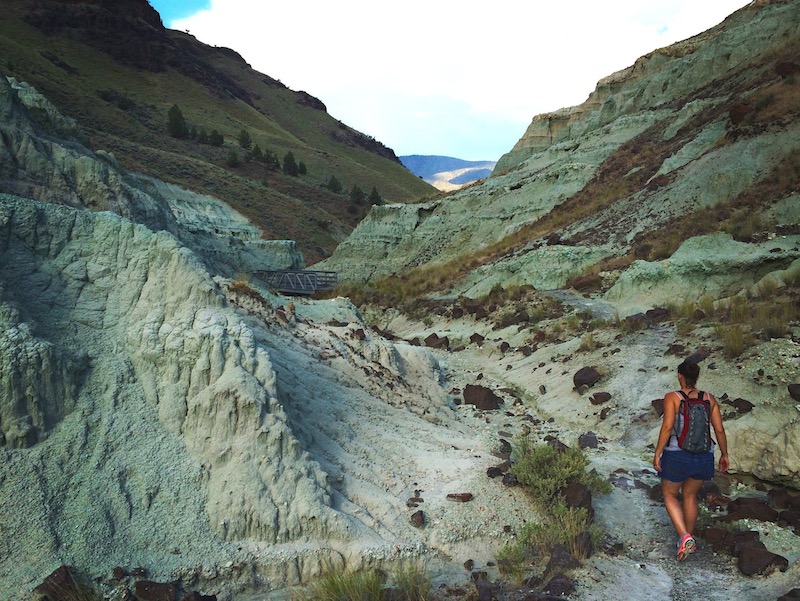 Despite the shock we get from our snake encounter, this dawn-hour adventure feels like we’ve stepped through a portal to the Land Before Time. And in a way, we have. The earth in the basin is literally, stunningly blue, a composite of weathering celadonite and clinoptilolite whose joined blood runs in blue-green rivulets down the sides of the formation when it rains. The rocks we pick up and the gravel we walk on are between 28 and 32 million years old. 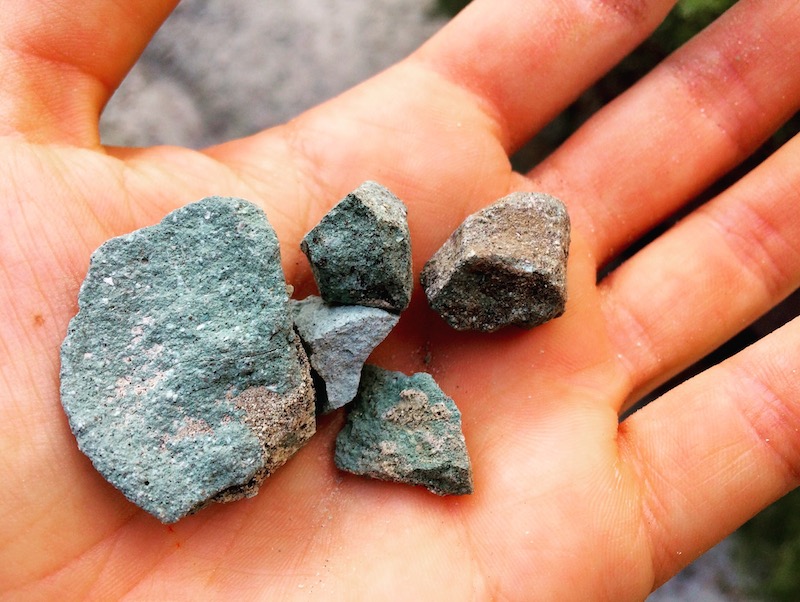 We visit the paleontology center across the road and especially enjoy the exhibited bones of three-toed miniature horses, nimravids, and bear-dogs. Plus a few others. 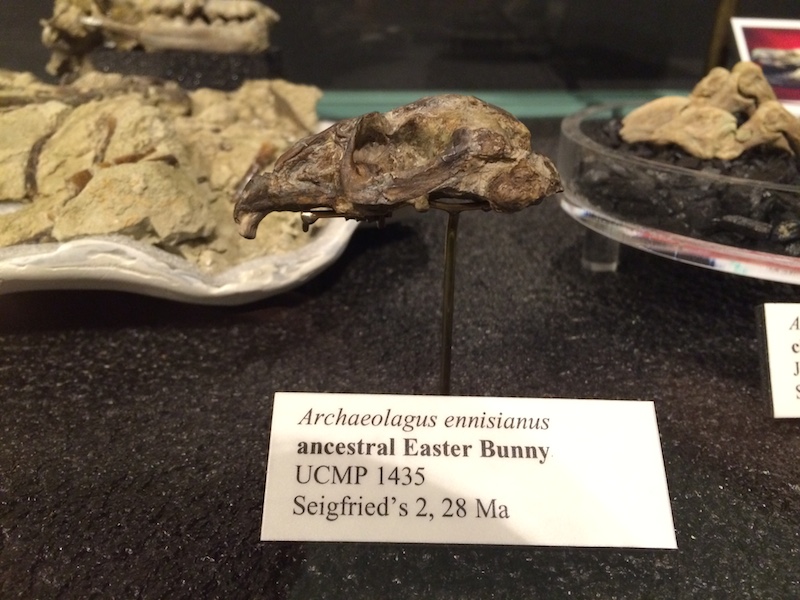 In Clarno, a trail weaves through a boulder field below the hoodoos and pinnacles, coming to rest in a hollow funnel where water and frost wedging have carved what appears to be a portal to the heavens. We rest inside its shelter, staring at the desert, feeling stillness. The rocks beneath our hands are both a record of history carved into stone and a record of time that continues to write itself with each crack, fracture, and crumble of the walls that all eventually tumble down toward the center of the Earth. 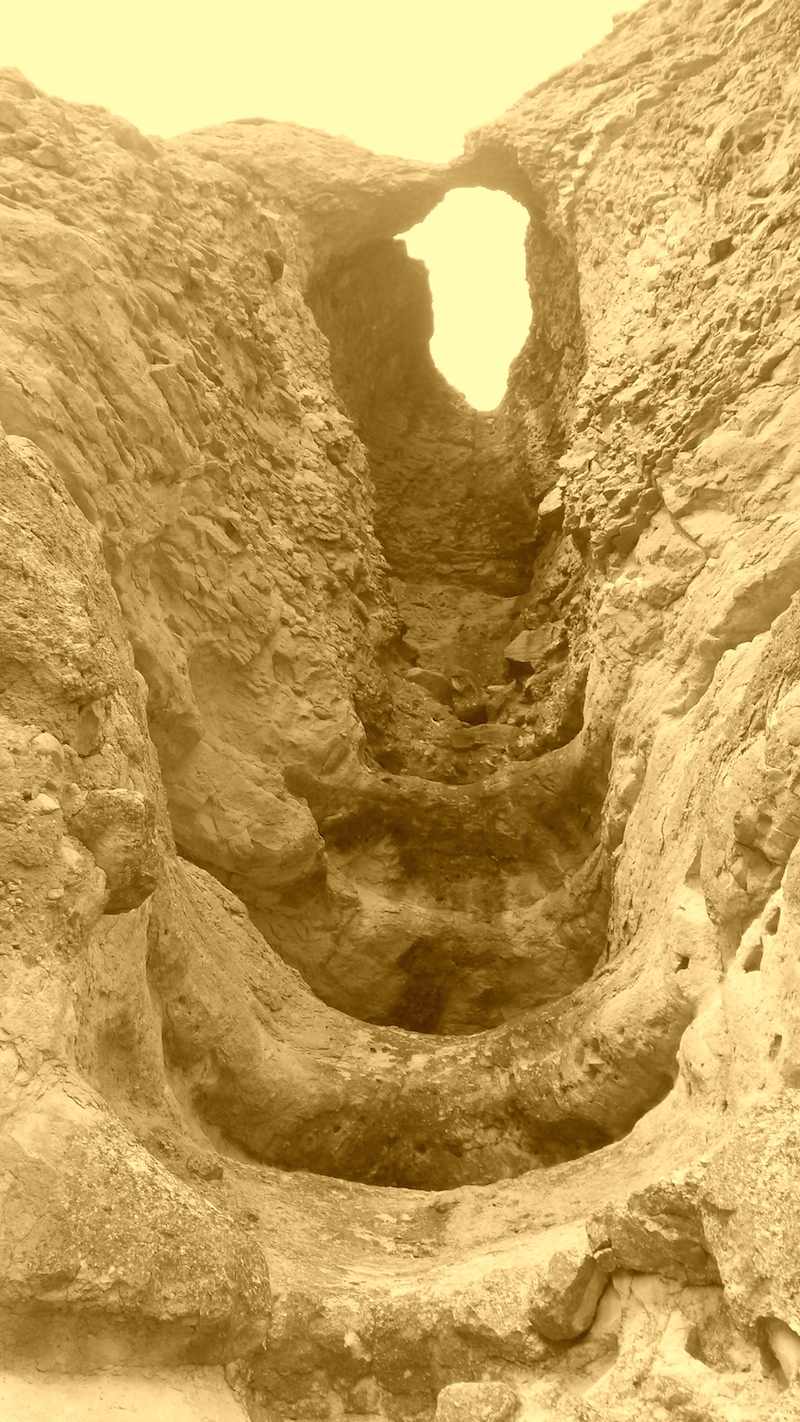 Next, a pit-stop in Fossil for beers and to study the map. Rowe Creek Road points us toward Priest Hole camp, and we see how far the car will coast in neutral (8 minutes; 4 miles) past the farm houses dotting a hanging valley resting below pine-forested hills. The turn off onto a gravel road, poorly defined on our maps, presents a quintessentially idyllic and deserted swimming hole. We are enchanted. Fish jump, bullfrogs bark a baritone chorus. Purplish pink cotton candy clouds waft across the husky gray-blue of dusk as lentil jambalaya simmers on the stove. 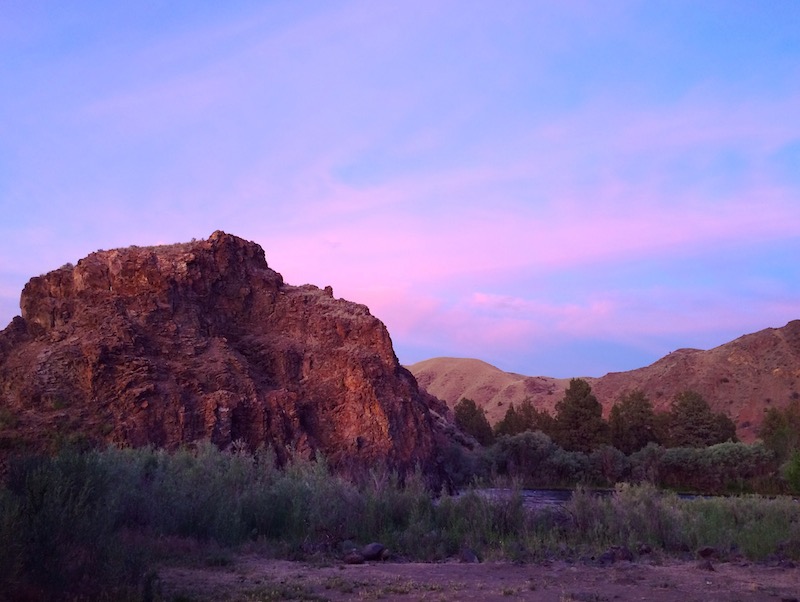 Just before dark, three trucks come barreling down the dirt road and pull up to the shore. The first is just a front cab flat-bed with only a cooler strapped to the back. Several young men get out and spotlights cut through the shadows. Are they night fishing? Bull frog hunting? We walk to the vault toilet together, standing guard, hoping it’s just a redneck Tuesday night. My knife is in my left fist as I fall asleep, Crystal holds hers on the right.

A flashlight shining into our faces wakes me from a strange dream, and I realize Crystal is speaking to a dark shape standing just outside the mesh of the tent wall. It is several heart-pounding moments before the words make sense to my ears: Our transmission blew. We need a ride into town.

I make out only one figure. Neither I or Crystal can see the other person, but I sense him lurking somewhere behind our heads. Minutes later, I hear his footsteps shuffling away after the kid with the light reluctantly accepts our response that no, we are not unpacking our car in the middle of the night and splitting up to have one of us drive them 15 miles into town, and to please ask one of the other trucks. After this, I try desperately to stay awake, tracking the distant glow of their lights and muffled words as they search for a willing party. Sometime later, the light comes through our tent again, resting on Crystal’s sleeping bag. My fear comes out as anger as I sit upright, knife in hand, wishing instead I had a better weapon. What the fuck are you doing? I growl in the direction of the light.

Sorry ma’am, but everyone else said no.

Crystal smartly cuts me off before I inform the kid how poorly thought-out his strategy is for getting help from two women camping alone in the middle of nowhere. After she tells him that we’ll try to help in the morning but for safety reasons we aren’t going anywhere right now, he seems to gain a delayed insight into our anger. I swear, I’m not a creeper, he blurts out, and finally he and the silent friend walk away into the darkness. They don’t return again.

We sleep terribly for the remainder of the night, so for the first time in days we stay in our sleeping bags until 7. It feels late, and a relief. When I get up to boil water for coffee, the trucks are all gone. Someone else must have rescued them, it appears.

It takes two pots of french press, the warmth of morning sunlight, and a river bath to wash away the transgressions of the night. In the daylight, our swimming hole feels sacred once again. 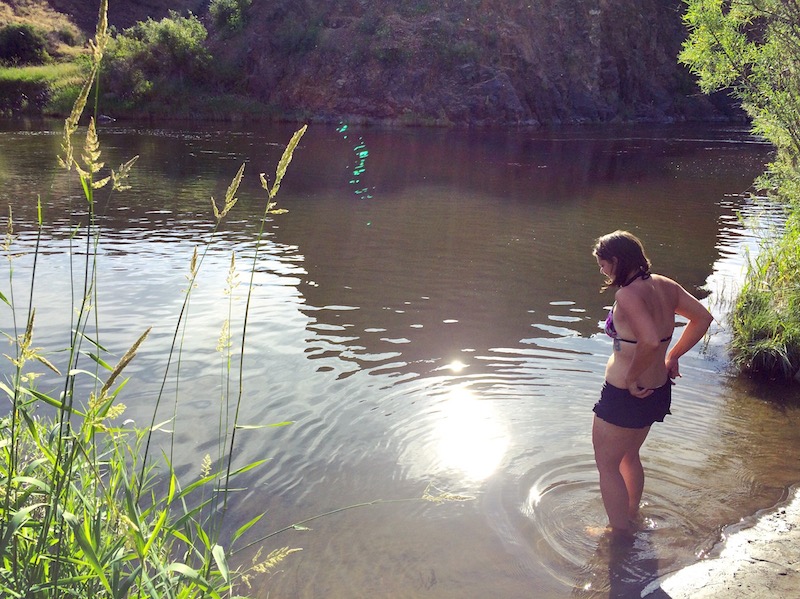 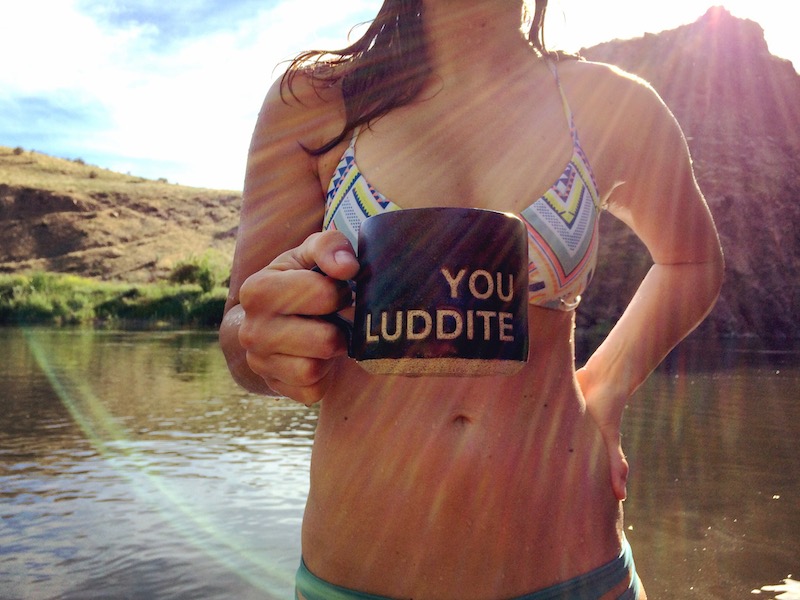 The trip has been almost spiritual in its lack of agenda and time captivity. We are free of schedules, cell phone service, and expectations. Forty-eight hours feels like half a week because of the ground we  cover and the time we spend sitting and staring, and thinking about everything and nothing at all. 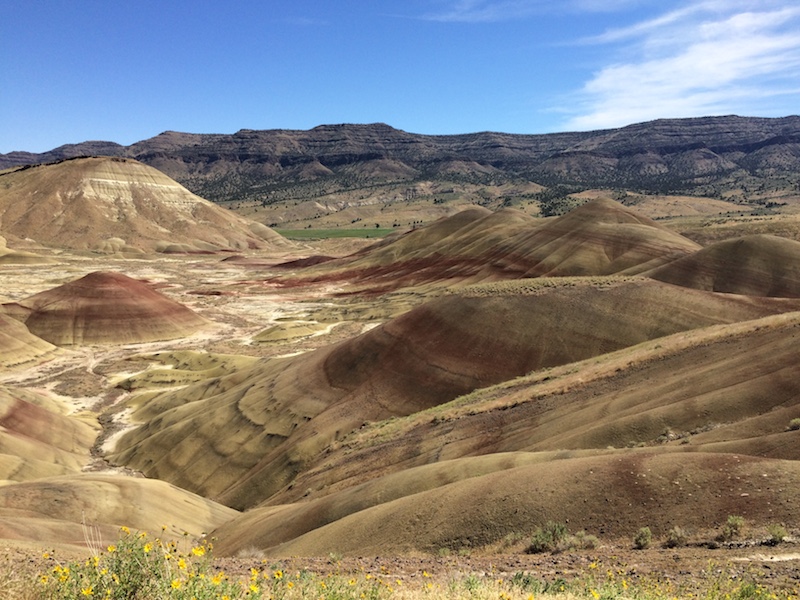 At the top of the Painted Hills overlook, two bright orange-bellied meadowlarks whip past our heads. I hear their song, hear the crickets, and think about all the pieces of blissful stillness in our journey. My mind’s eye sees the poem I wear tattooed across my ribcage:

The words ring true for me every day, but sometimes I get too caught up in fighting certain facets of life that I forget to look for them—the birds. Yet they’re everywhere, in the in-between spaces. In the quiet between the long hours at work, between atmospheric tipping points, between gunfire and barrel bombs, between the death of my grandmother and that of the woman at work who is losing her mind, between broken marriages and fizzled dreams, in the midst of all the violence of being alive and human. Between all of this, are moments of simple, unequivocally pure goodness:

The coo of morning doves. A turtle crossing the road. The smell of sweetgrass through a rolled-down window. Banjo twang. Petrichor.

And occasionally, the moments stretch into days. 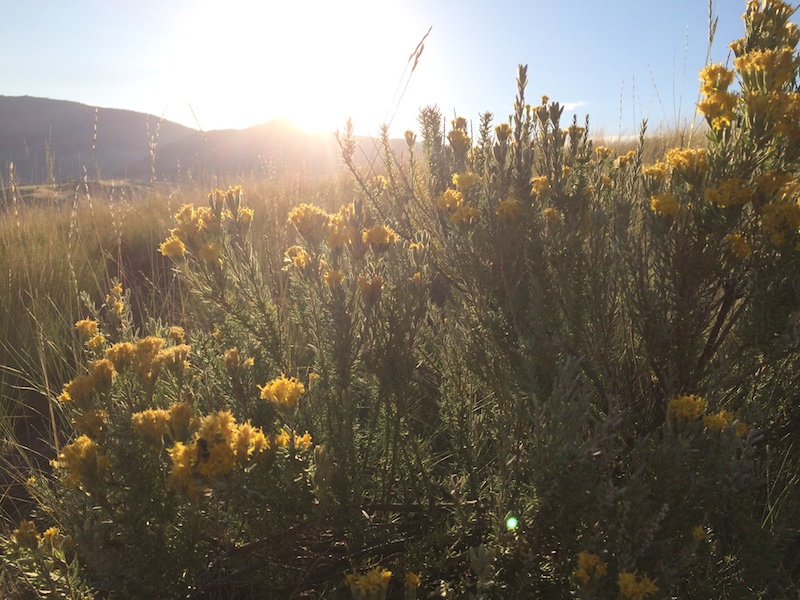 On the way home, we stop off in Wasco to see Crystal’s step-grandparents, John and Wanda, whose lineage runs through a significant portion of the land around town. They hand us glasses of gin and bourbon, we tell our tales and hear the latest gossip. We are planning to go set up camp near the mouth of the Deschutes river when Wanda invites us to dinner.

We’ll take ya to the exclusive VIP truckers tavern says John. So we trade our last campstove meal for the works at Bob’s Texas T-Bone and Frosty’s Lounge in Rufus, where a cowboy reminds me to stop trying to be so polite, and just use my damn fingers to eat the ribs.

[Thanks to Crystal Soker for several of these photos, most of the driving, and all of the gourmet camp cooking]

Only rock and sun
On a mountain, with pie