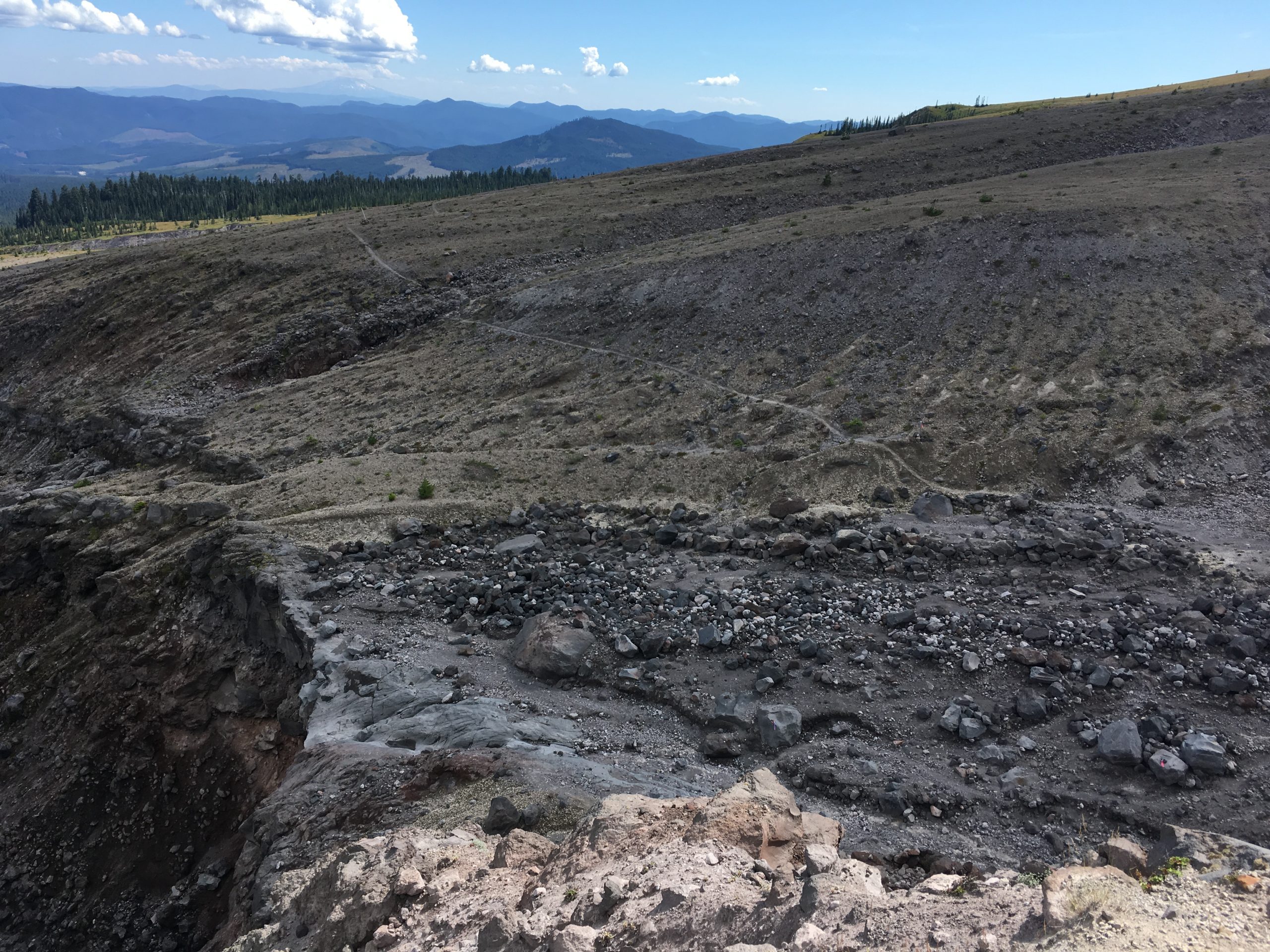 “What were you thinking?” is my father’s laughing jab while I stand, half-crippled, in my parent’s guest bathroom, brushing my teeth. I’ve just run 32-ish miles around Mt. St Helens alone, and the answer is, I wasn’t thinking much. Funny thing about running (and walking, shuffling, hobbling) around a whole damn volcano is that you might assume you’ll experience a kind of profound enlightenment, and instead you end up singing the same two lines from a Pink Floyd song for ten-and-a-half hours straight with no relief. Mostly you think about nothing. Except for water.

I did ask a lot of questions. Mostly along the lines of, what were my motives for stepping into this boxing ring? I easily could have run in terrain much friendlier to a parched human than the desolate, shimmering dust-scape of an erupted volcano’s blast zone. I’d briefly contemplated trading west for south, and running up the Olympics’ Enchanted Valley, or really anywhere less sere than the Loowit. But the heaviness of this summer demanded more. I wanted to feel gutted, maybe.

With each mile, the wandering of my conscious thought yo-yo’ed between the loftier concepts of life as a human and the explicit sensations of muscle and bone and organs. I remember telling Sara, before I left, that I wanted to do something to pull myself out of my head and back into my body. Perhaps a temporary, self-imposed asceticism.. except, I could indulge in all the snacks I desired.

On the approach to Windy Pass, with something like ten miles left, I suddenly heard my heart rate in my ears hammering over 200 with an urgency I’ve rarely felt before. I hung face down over my hiking pole for a few moments, and then walked slowly, delicately up the pass. I have experienced bonking before, but never heat stroke or rhabdo, and I wasn’t looking for an initiation out here all alone.

I watched every half-mile tick off slowly on my GPS watch until it finally ran out of battery after mile 25. I knew I’d finish before dark so I resolved to stay alert and hydrated, and to try to run as much of the final section that was left. I’ll be honest, I wasn’t running anything with an incline at that point. By the time I crossed the last talus field (repeating aloud in Johnny Depp’s voice the lines from Fear and Loathing’s bat country scene but replaced with the word “boulders”, as I’d been doing all day), I was mentally depleted. Nearly grouchy. In full-body pain. Trying to come up with other songs to sing, but damn you Pink Floyd, I couldn’t quit you. Run, rabbit run.

I hit June Lake and the waterfall and breathed a sigh of relief. The Loowit loop was done. With 1.5 miles left to reach the van, I walked it in the rest of the way, hobbling and feeling simultaneously content and utterly wrecked.

Does this make me an “ultra runner”? I don’t know. I completed it, but I ain’t racing.. do I want to do more of this? Maybe. Probably… Yes. But preferably with fewer drainage basins comprised of loose volcanic sand, and ideally a partner to share the suffering and the heaping plate of post-run nachos. Just kidding, you’ll have to get your own nachos.