My plans for the long weekend were patchy and unconfirmed as I set out in my car alone on Saturday morning, but I had three goals. I wanted to climb. I wanted to camp and explore more of the valley that runs out from the Coulee’s dramatic basalt columns into a dry glacial plain before diving over the cliffs of the Columbia River Gorge. And I wanted to sail. A good friend of mine was going to be starting a new chapter of life, kicking off his dream to live aboard a sailboat, and the chance to help deliver the boat from Port Orchard to its new home in Elliot Bay was exciting enough to keep me from sleeping in my car at the crag all weekend. It was a tall order to pack into three days, with all the driving back and forth and choosing to not take work off for the holiday, and as I headed away from the rainy city toward Vantage, I wondered if I’d set my sights too high.

I should know better by now: the work always gets finished, somehow, and the nights are always filled with a sense of wonder at how incredibly good life became after I figured out how to place the pursuit of joy on the same plane as the pursuit of a career. Can it just keep going on like this, always filled with magic? Is that possible? Maybe these are questions best left alone, better to let the guidebook write itself as I go. Here are the latest pages.

I. Climb the Coulee 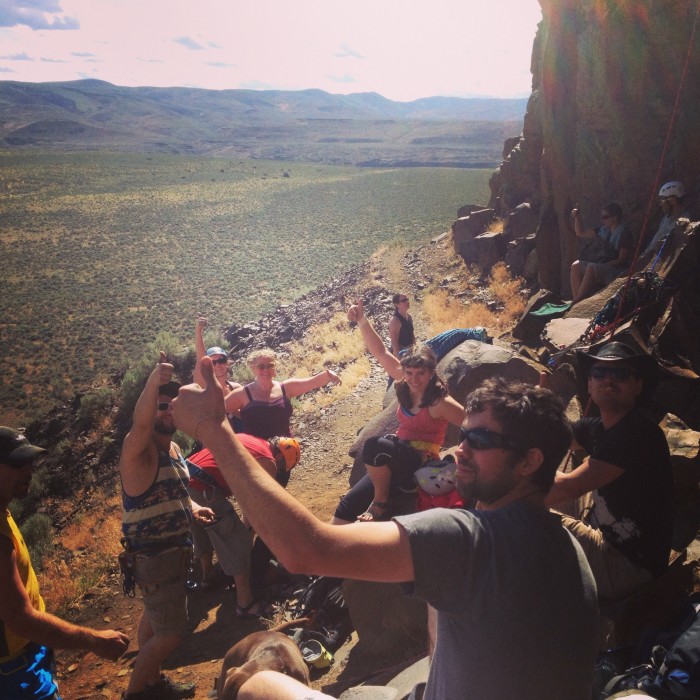 At the main Feathers camp, locate two blue kayaks sticking out of a truck and find Mike and William waiting with a pile of gear. The spice of desert sage, hinting at cinnamon and juniper, is intoxicating as you get out of the car, glad to have left the rain behind for warm, dry desert. Leave the tent unpacked, and head for Sunshine Wall before the escarpment becomes shadeless.

After a lengthy struggle to decipher which section of the wall you are standing in front of, pick a route and tie in. Mike leads while you feed out slack, in single lengths as he ascends and double or triple lengths when he pauses to clip a draw. These are the mundane parts of climbing that you silently love: the cycle of the rope from hand to hand. The tacit communication that travels between climber and belayer in the form of movement and rope tension. The trust that builds up from these patterns, in the space between the motions. It’s not a fluidity that you find with everyone, but when you do, good days at the crag become all the more sacred.

Soon, Katie and a new gang of comrades will show up; spend the rest of the day trading ropes and partners, dodging falling rocks and taking on challenging routes. As evening settles in, thanks to an impressive lead by a stranger whose climbing stoke is so great he hitched a ride to Vantage with two heroin junkies before finding you on the wall, take a turn on a 5.11 trailing up the arête of an 80-foot block. Half-way up, pull off a hold and have an exhilarating swing into the void of air at your back, before reaching the anchors, happily exhausted and finally ready to call it.

Once Tim and Mike each fire off a send, pack up and navigate the footpath back to the parking lot, as nesting swallows fly in and out of the rock chimneys around your heads and the valley falls under shadows. At camp, circle up together by the fire for a while, before the sweetness of a hard-earned sleep pulls everyone away from the flames one by one. Stand with Mike and William to watch the moon rise silently over the mesa, flooding the Feathers with a cold, milky brightness, before climbing into the back of your car and into a dead slumber. 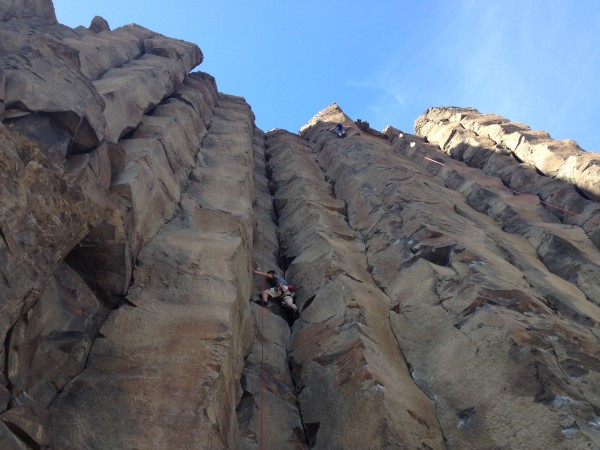 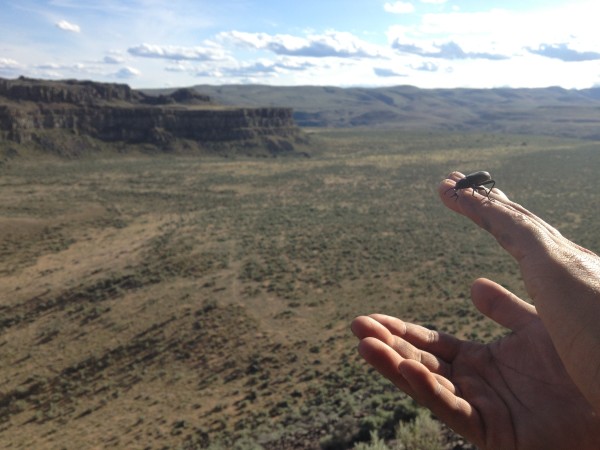 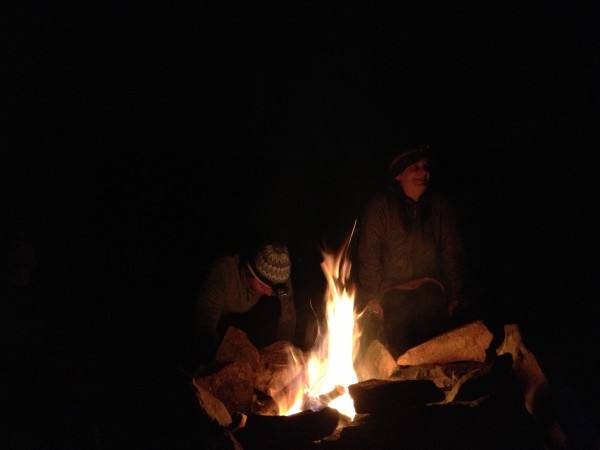 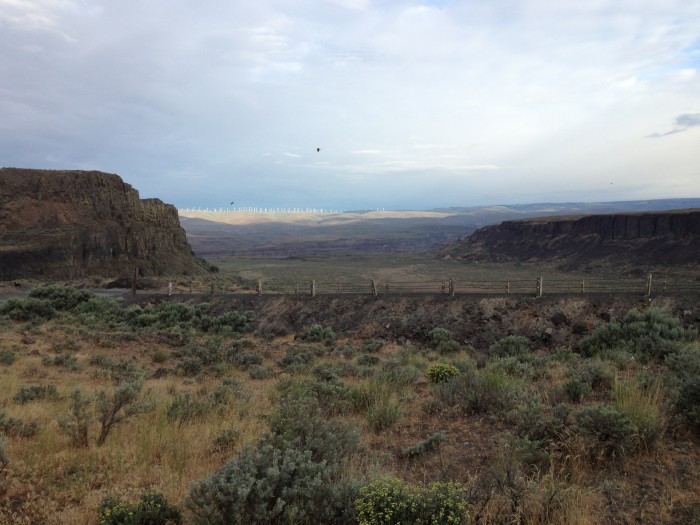 Awaken at dawn on Sunday, to a view you’ve been longing for. Torn between the comfort of  sleep and the urge to pee, crawl slowly out of your sleeping bag nest and into the silent morning. Barely 6 am, it’s just you and the birds, stretching your wings in the soft pink twilight.

The colors of the desert are enchanting at any hour, but in that quiet magic of early morning when the world feels a little softer and anything seems possible, the heathery purple and dusty chartreuse have taken on a soft electricity, brimming with secrets. Start walking toward the road that leads to the river, just to gaze at the valley before turning up the mesa trail to find a private rock—the spell on the breeze will catch you and the next thing you know, you’ll be hopping the guardrail and contemplating a scree slope that leads down to the bottom.

Where the fence runs out, find a well-worn trail emerging from the edge of the asphalt and choose that route instead. It traces back toward the waterfall that spills out from the cliffs nearer to the frontage road, circling boulders and the final resting places of rusted truck skeletons, before looping in the other direction, out to the drop off into the river. There is only one thing to do in a place like this. As the sun climbs, diffusing its light through cotton candy clouds, start running. 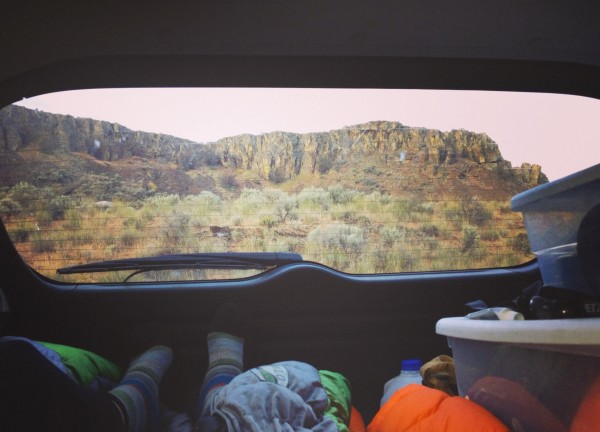 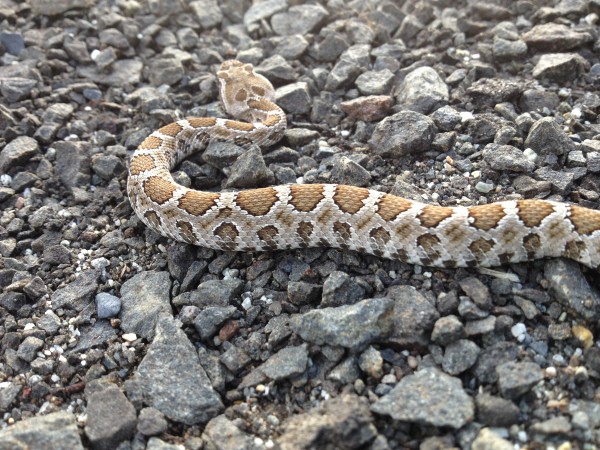 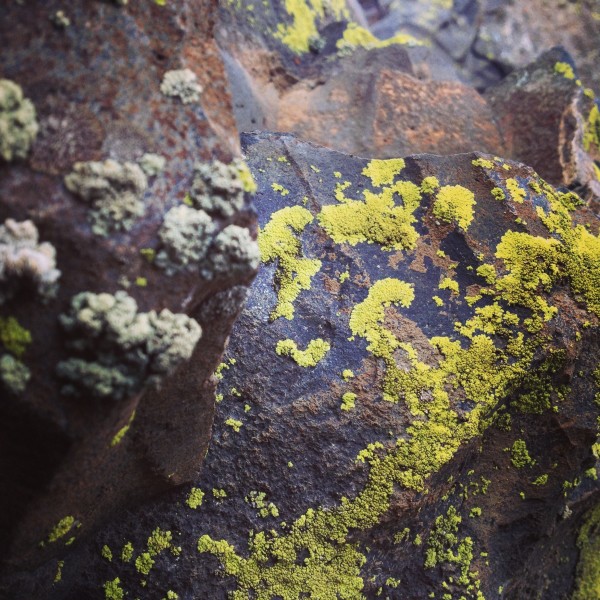 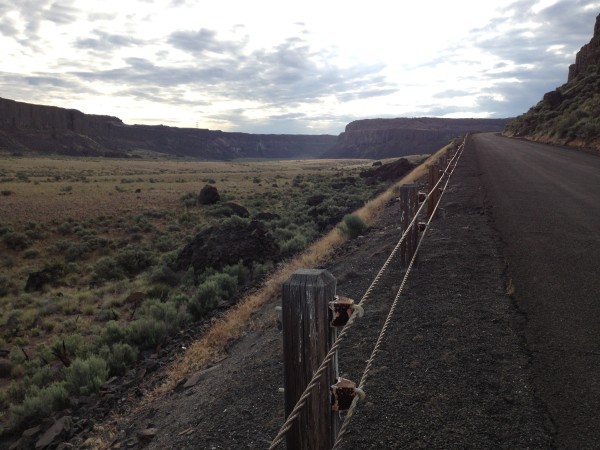 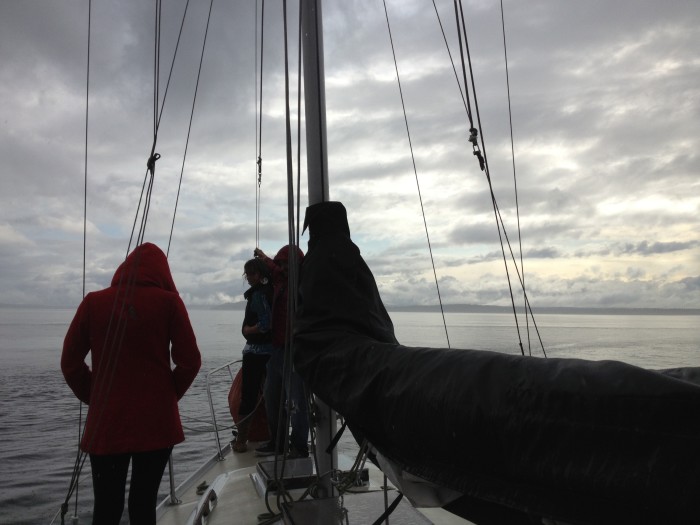 Monday starts drearily, under a drizzle and fog, but none of you care. There is a boat to sail and water to float on and adventure to be found. Ride the ferry to the west side of the Sound and wait in the rain for Milo to pick you up in the Kabeki, fighting a nasty current through the harbor. No one will be dressed properly for how wet it is, and the clouds will seem to block out the world beyond the water as you set out from the marina into the thickening grey. The hushed feeling is beautiful, even as the rain whips into your eyes and the blood drains from your fingers. Everything is soggy, but everyone is happy. On the bow, stare at the city skyline, muted into greyscale by the fog, and feel the trance of detachment from land life that comes as your feet steady with the rolling of the waves.

Shiver together with these people that you love, on a boat that is now a home for one. Count cormorants skimming the surface, sing to a slumbering sea lion, and watch porpoises surface to breathe, their small fins rising into view for seconds before disappearing beneath the dark green water. During breaks in the rain, raise the sails in search of wind; the wind will elude you, but no one cares. The hours tick by, but they don’t seem to matter—go ashore for something warm to eat, and then find yourself back on the boat again with nowhere to be but anywhere. As evening slides in through the Strait of Juan de Fuca, the mountains of the Olympic Peninsula rise up from the far shore, visible finally as the clouds part in ripples, backlit by a lemonade sunset.

Lie down under the jib while the wind that finally found the sails takes hold, pushing gently forward and pulling the halyards tight as the breeze whispers the plans for escape into everyone’s ears. This freedom is possible, the lightness palpable. A peaceful delirium unfolds like a blanket, wrapping around shoulders and tucking under feet with the borderless love that comes from a day spent in the company of kindred souls.

At the harbor once more, with night taken over and the neighboring sea freighters aglow in floodlights, say goodnight and wonder how you never before thought of living on a sailboat as one of the most sensible things to do. 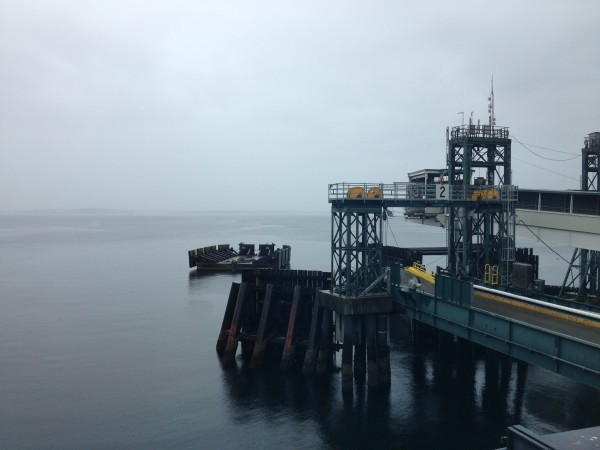 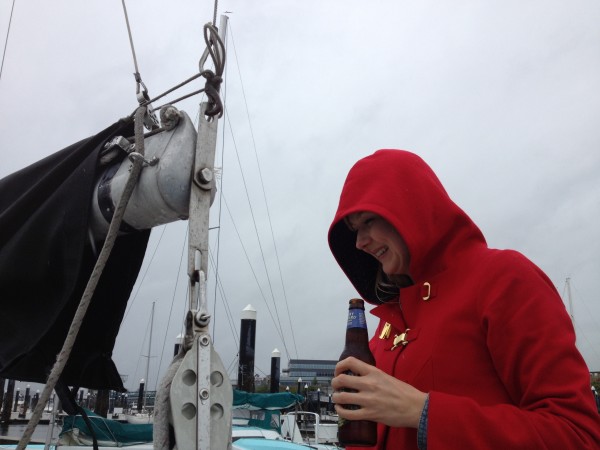 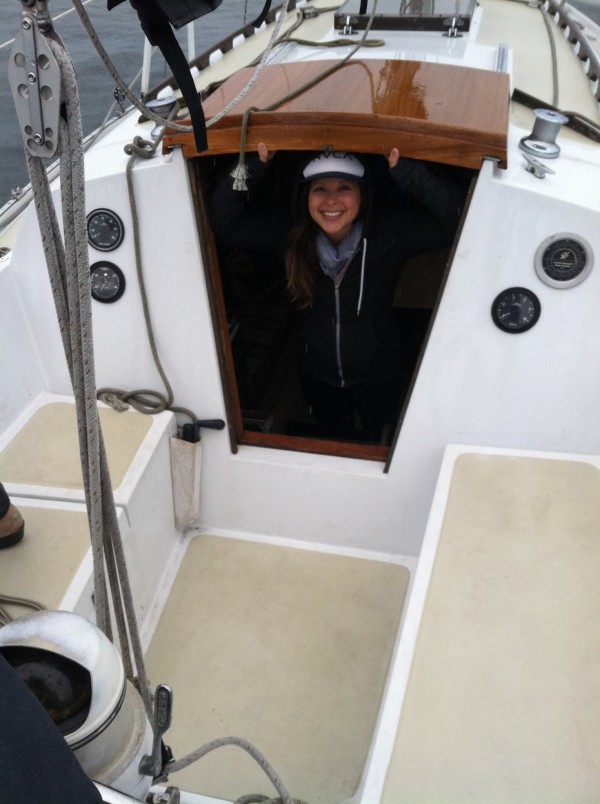 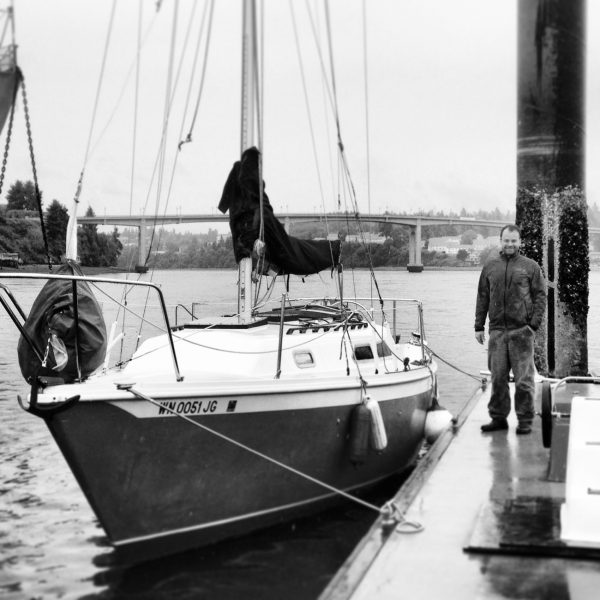 The tapestry of tribes
U-Turn