There is no field guide for the decisions we have to make in life when we come across forks in the road that we weren’t expecting. The maps we follow might show the outline of a path, but the conditions on the ground are entirely a product of time, season, and maybe fate. When we hit log jams or intersections, we must choose: up and over? left or right? forwards or backwards? 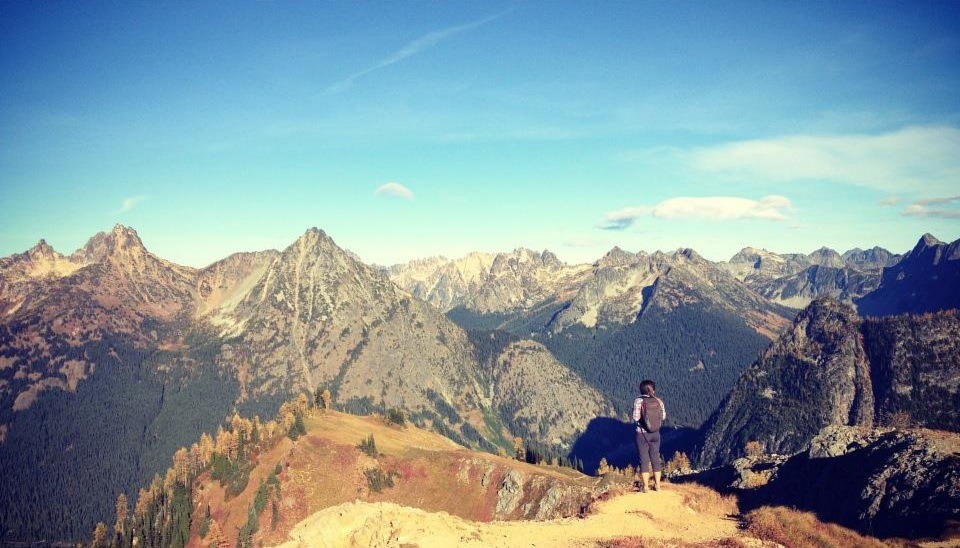 As civilized beings of the so-called Modern World, we’re not taught how to listen to our bodies. We grow up lacking knowledge of how they work. Instead, we are taught to fear them, be ashamed of them, manipulate and mutilate them, and flat out dishonor the visceral messages roiling around in our guts—after all, bodies are simply a matter of science. Reducible to a collection of parts, integers, known elements.

I don’t believe in this straightforward factualness, at least not as a sole truth, but it took a long time to act according to that (dis)belief. Finally, almost two years ago, I listened to my guts for the first time—really listened. It was terrifying. It made me physically ill, the more I listened. And then, it led me home, and what had felt like it might be right turned out to be exactly that.

Just shy of two summers later, I’m riding in a car filled to the hilt with sticky limbs, sweaty and tired bodies, camping gear and convenience store snacks. We’re on the long haul to Idaho from Seattle, a homecoming trip of sorts for Bryce, Tyler and Milo, and a wild ride into rural America for me and Sara. 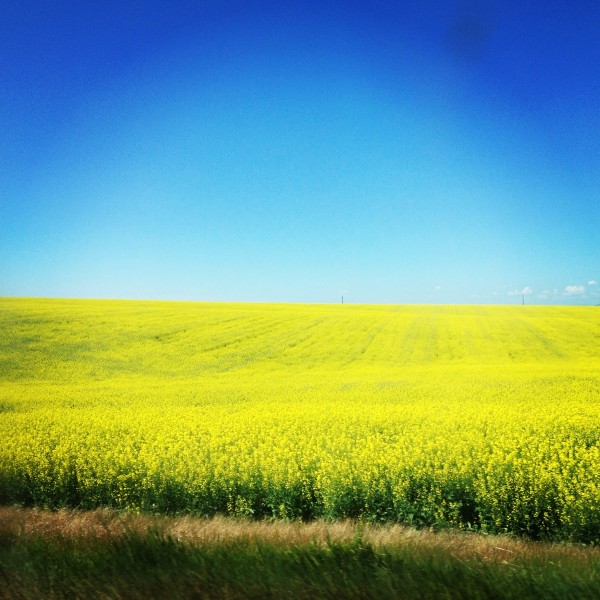 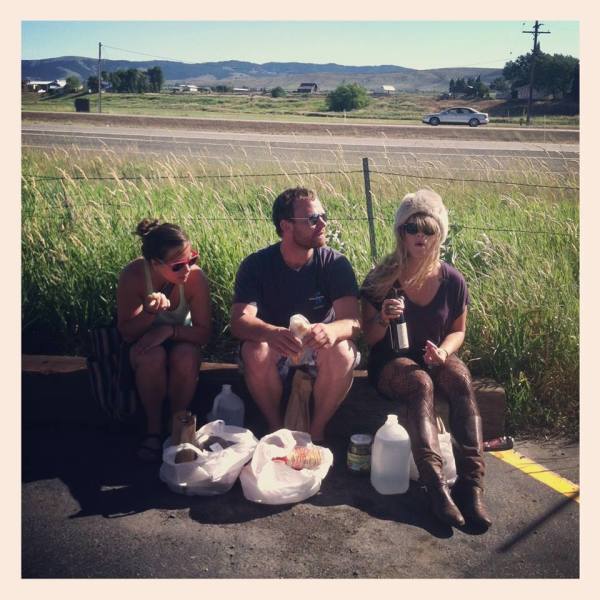 At stops for gas or to pee, we stumble out of the car in a heap, seeking refuge in the artificial, air-conditioned coolness of the convenience stores, pressing our hands and foreheads to the glass doors encasing colorful rows of soda and beer. I don’t want any of it, only to cool down my overheated body through my palms and fingers. We leave smudges on the glass, crumbs in the parking lot, and continue down the highway.

We  spend several days in the thick of west-central Idaho, with our Out-of-Office messages turned on and satellites straining to find us. We camp on the white sandy shore of the Salmon River and let the outer edge of its fast-moving current carry us like rag dolls into an eddy near the cut bank, again and again, before curling up in our sleeping bags next to the silently moving water, sprinkled by the glitz and glam of the Milky Way. At the retreat home of an herbalist who appears to us as if she may be Mother Earth herself, we pick green beans and raspberries, and dream aloud of one day having our own Shangri-la complete with a Finnish sauna. 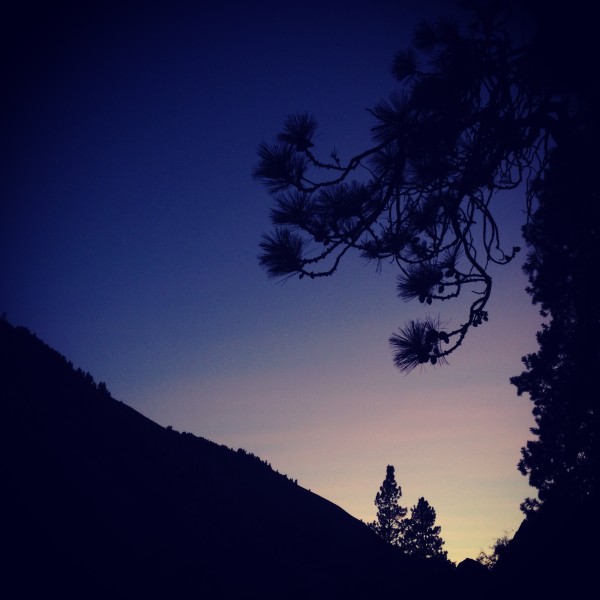 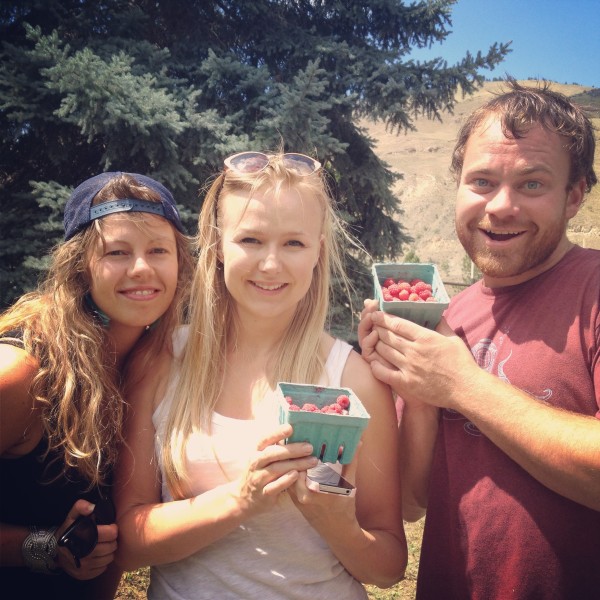 We visit the small towns where the three Idahoans came of age. We hug their parents, laugh with them at recalled memories. There are photos everywhere that each tell a story, and we devour them. The past that swirls around these places sits upon the shoulders of each of us differently: comforting and amusing for some, less so for others. For Sara and I, strangers in these towns and houses, they are locations on a map that mean nothing to us other than that they are where three people we love dearly once toddled around, scraped their knees, got into trouble, fell in love, became lost, found courage and trace themselves back to like unraveled strings of yarn. And so, they become important to us, too. 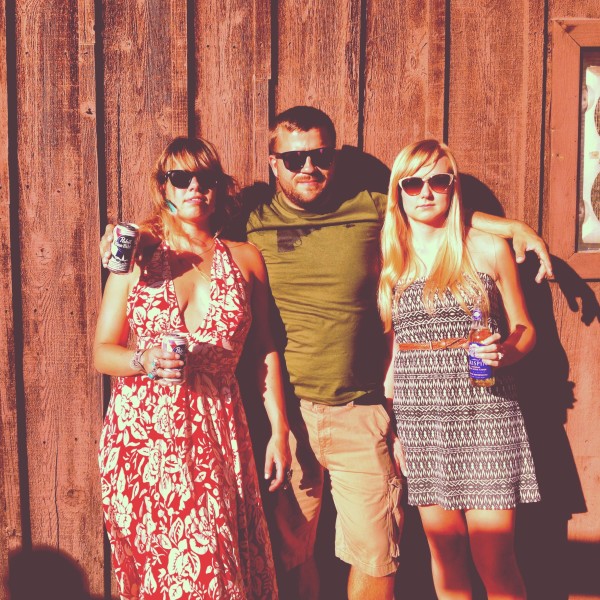 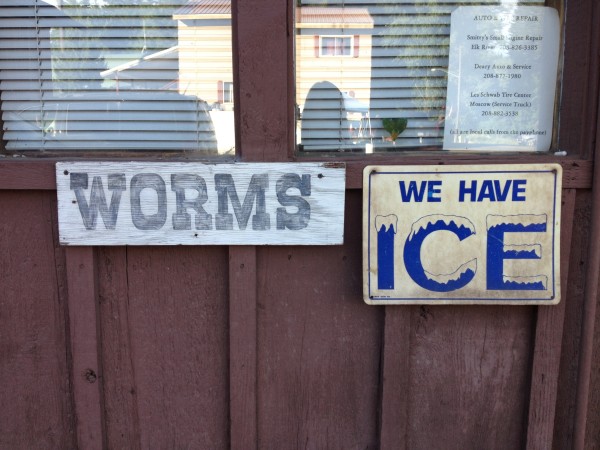 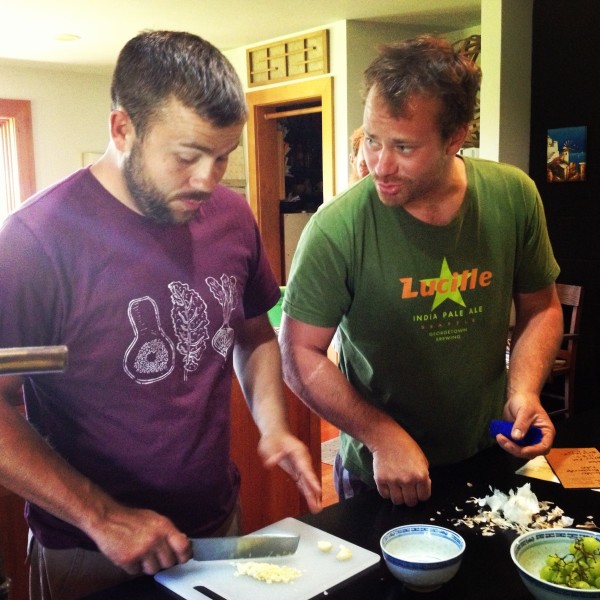 After four days, we pile back into the car. We are tired, we have spent too much money, we are weary of the heat and there are monotonous hours ahead of us on the shimmering black highway. We are much quieter than we were on the drive east. Somewhere along Interstate 90, the thoughts I’ve been thinking all weekend long, thoughts that have resurfaced again, rise into the silence between me and the blurring landscape outside the backseat. The fields of golden wheat, the patches of dusty, bare earth, and swathes of pine forest go by, on and on, and I say to myself finally, clearly: I really don’t want to move to Toronto. 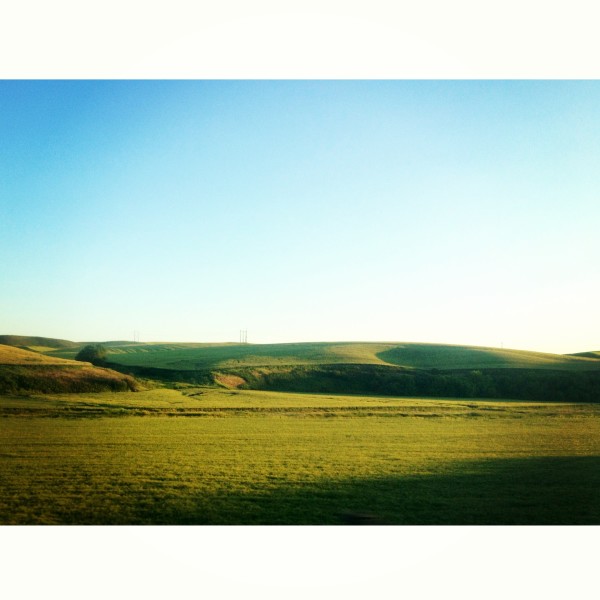 I say nothing aloud about this in the hot, sweaty, tired car, only stare and think. Somewhere in the rain shadow of the Cascades, we three girls drift off into bored catnaps of half-sleep only to be jarred awake by bloodcurdling screams awakening us with panic and confusion and the instantaneous understanding that we’ve been pranked, even as our bodies and faces continue to react. The sickening impact felt in previous car accidents echoes through my limbs, a ghost that haunts me from time to time even on quiet streets, and I swallow my almost-tears, embarrassed but not wanting to be angry.

Finally, we are home. I spend the next week digging into other options, sending off a hundred emails, tracking down more transcripts and suffering through the elevator music of phone calls placed on hold that prove unhelpful anyway. My brain feels fogged in. I’m overwhelmed with the weight of my potential decision, but the funny thing is, I feel 50 pounds lighter. In the grocery store, I have an existential crisis over picking out shampoo, none of them seem like the right decision, and nearly 40 minutes later, I throw one into the basket along with two bottles of wine, and go home to the deck. The next day, I take the ferry to the island and meet my mother for lunch. 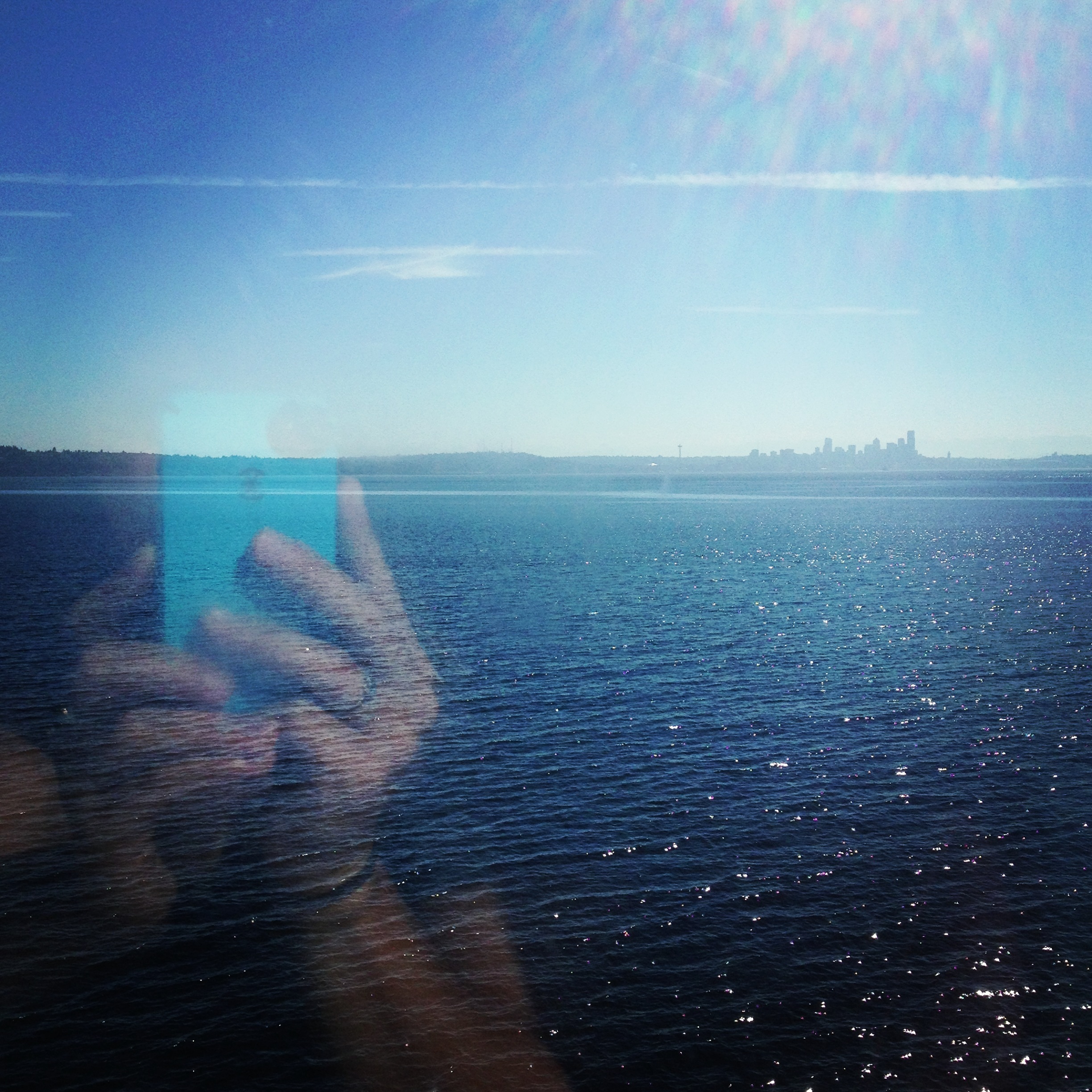 We are both in need of answers, our bodies telling us things that are hard to hear. At a cafe, we sit on the patio, trying not to let tears of frustration seep out from the corners of our eyes as we squint in the sun, talking about fears, regret, decisions, love, journeys. We are the sort that cry too easily, the result of our bodies continuing to react even when our brains have sat up straight, jaw-set and arms crossed, determined to be okay. When our bodies catch up and settle down, we put on our sunglasses and walk around in the sun, smiling now. The obstacles we are each in our own spaces confronting are not yet behind us, but I think we both know that somehow we’ll get by them.

I have to make a decision, and again it feels terrifying. Again, I’m about to give up a sure bet, a kind of security, a defined path, trading these for the idea of something else that is entirely uncertain, a restart, square one. One makes me sick with dread in my gut, the other feels exciting, compelling, true. I’m almost 30, I say to myself, as if this age warrants making decisions differently than I used to. I suppose I owe myself at least a few shreds of confidence, but the track record I’ve cultivated as a runner—from country to country, state to state, job to job—has left me exhausted with this habit.

I go to Doe Bay on a writing assignment over the weekend, and I spend most of my time there in silence. My only conversations are with a naked man in the sauna and the girl at the desk who checks me in. The birds and the wind and the water on the sand and the people around me all do the rest of the talking. I listen and watch and sleep and walk and sit. 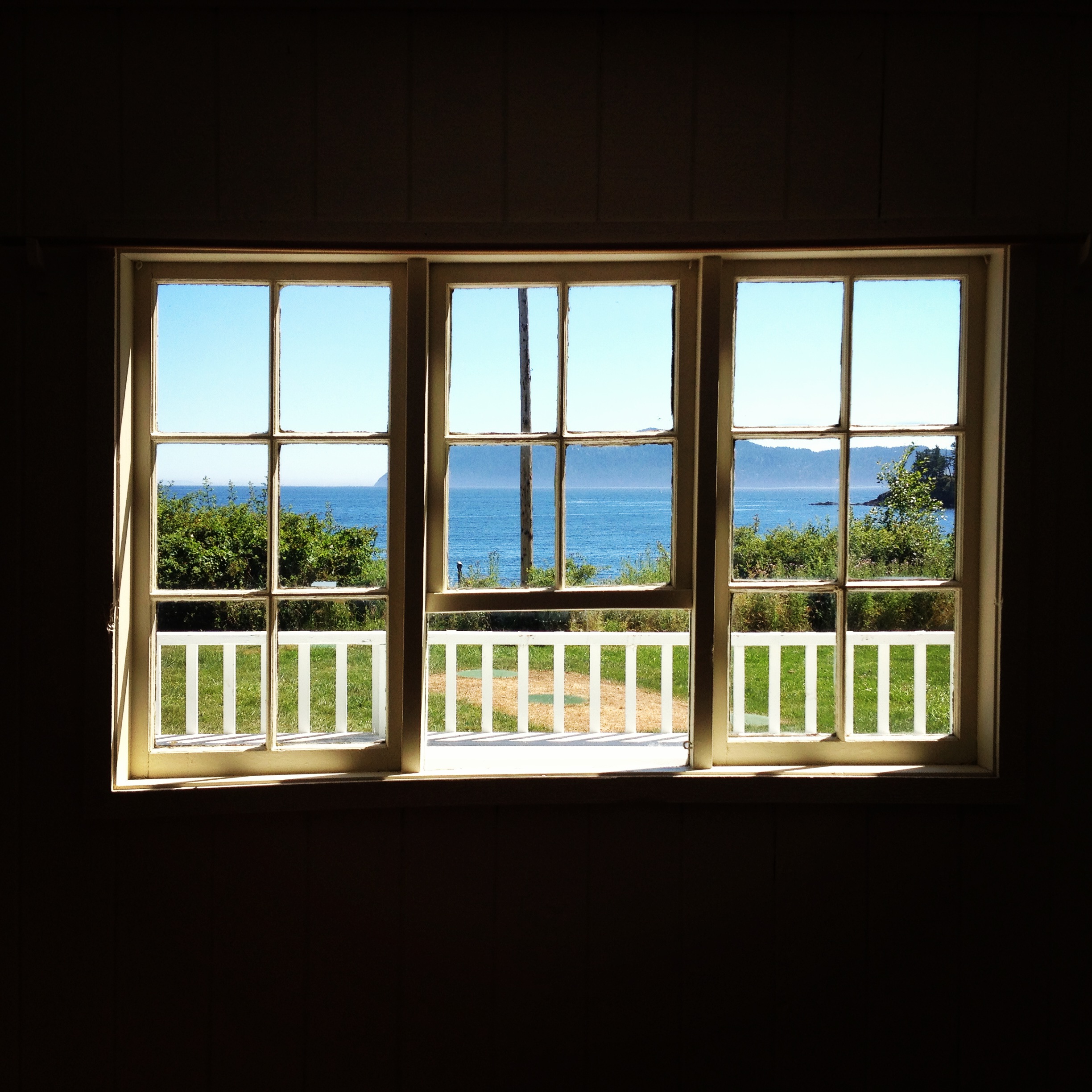 There is no field guide for these trials that make up our individual journeys: love, friendship, children, careers, death, loss. There are a million books out there telling you how to get through each of these parts of the journey. Hell, there are even blogs telling you what to eat for lunch if you can’t bring yourself to make a decision about that. But ultimately, these sources of advice make no difference if we don’t first ask ourselves what it is that we want.

And we can’t know what we want unless we first know how we feel. We have to choose how to navigate the pieces of our lives on a case by case basis, for each part is subject to the forces of time and space and the chemistry of those around us. Technology might seem to make things easier, but a lot of times that’s merely a trick. The path may seem straightforward if you’re only looking at the endpoint, but if you ignore what’s in between, you may find when you get there that it wasn’t what you really wanted.

Which is to say, I’m not moving to Toronto.

Triple Crown
To Oregon, with love